The Truth about Cats and Moose

Ladies and gentleman, I am proud to say, I am now the owner of a RESCUE CAT!! Doesn’t that sound kick-ass?  I mean, I can’t even type RESCUE CAT without doing it in all caps because it sounds like it should be the name of a fucking superhero!

It would be like a cat superhero who rescued people, and I should totally use that concept for one of my comic books. But, in this particular case, I rescued the cat.

His name is Minky Boodle (Which is a complex reference to a song from a 90’s show called Cartoon Planet, which only six people will remember, and the song was actually about a dog.)

Anyway, the Minkster is super adorbs. I think he might actually, technically, be a Pokemon, because he is sort of a hybrid mix of a Maine Coon, a tiger and, like, a squirrel or something.

And speaking of Pokemon, I think he might be related to Snorlax, because he weighs roughly 100 pounds. Every time I pick him up, I throw my back out.

He’s a really nice guy, though (Although he does decapitate chipmunks and leaves their partially devoured carcasses on the back patio, which is a bit rude, but we all have our flaws). He came up into my backyard one day,and we hit it off instantly. He seems super domesticated, so,I think he must have had a family before me, but they probably kicked him out because he ate all of their food.

Now, full disclosure, MooseHeads: I am a cat person.

I only ever had one dog. It was a Pitbull that my dad impulsively brought home one day, when I was kid. It bit me on the dick, while I was on my swing set, so, my mom made us get rid of it. (Funny enough, I named that dog Tigra from the Thundercats, who is a cat.)

A lot of dogs are not mean, though, but most cats are. I have another cat named Superman ( I named him that because he has a patch of fur on his chest that looks like the Superman symbol).  But don’t let his name fool you. He acts more like Lex Luthor than Superman. I’ve had him for over 15 years, and he still tries to murder me on a daily basis.

But maybe I love cats because I can relate to them. They seem all cute and cuddly, when, in actuality, they are dicks, and that makes them way cooler than dogs. Most dogs will instantly love you, and be loyal to you, and most cats would just kill you, if they could, and steal all of your food.

Here are some pics of Minky and Superman.  Gaze upon their awesomeness: 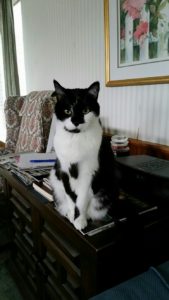 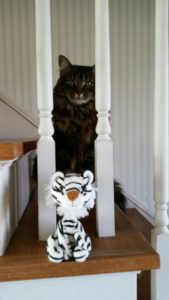