Where the Hell’s All the Doc Boy Merch!? Well at Least we still have Grimace and Charcuterie.

Recently, I was at Sir Troy’s Toy Kingdom, a magical full service toy store, in the Grande Shops area of Medina, perusing their selection of He-Man and the Masters of the Universe toys, which included some of the Masters of the Universe Origins collection, which is a line consisting of action figures meant to replicate the look and feel of the original toys from the 80’s so you can open them without wearing diapers. (Hopefully.)

It reminded me of another famous Medina landmark which contains a lot of He-Man toys: My mom’s house.

All my old toys are there, from back in the day but if you happen to be ambling through Medina for some reason and want some He-Man toys, please don’t break into my mom’s house. Go to Sir Troy’s Toy Kingdom and ask Sir Troy instead. Only Santa is allowed to break into my mom’s house, and he used to bring the cool ass shit, not take it.  (Though he never did bring me a Metlar from Inhumanouids! )

I will be spending the Christmoose holiday at my mom’s, and you’d  better believe I’ll be busting out all my most treasured and elegant holiday décor. Like my legendary Grimace cookie jar.

Yes, we all keep Christmas in our own way and my way involves a cookie jar of that portly purple McDonald’s mascot, Grimace, wearing a Santa hat. I also have a wobbly animatronic Bugs Bunny  garbed in a Santa Claus costume, and my ceramic Christmas houses, one of which is a North Pole airiplane hangar that I got from a quaint old shop right on Medina square. I’ve had them since childhood  and they were so well made I never once questioned why Santa’s operation would require an airplane hangar. (Doesn’t he have magical reindeer with the power of flight?  What the fuck!?  OK, now I’m questioning it.)

Personally, I don’t have any reindeer, myself, but my cat is the size of one and I take part in the annual tradition of strapping antlers onto him which is no mean achievement since it makes him understandably uncomfortable.  One year we strapped on an elf hat while he was asleep, and I send out an adorable text, telling people he’d had “too much eggnog” at the party .This was not true. I don’t care what any Influencer might tell you, no amount of eggnog will get a cat to willingly Velcro on some kind of festive headgear. But tradition is tradition.

And some of my traditions are more unconventional than others, like my cousin and me saying “Don’t call me Doc Boy” to each other every year. This phrase is, of course, from “Doc Boy” Arbuckle, Jon Arbuckle’s easily agitated brother, easily the best character by far from the Garfield Christmas Special, which was a holiday favorite of my cousin’s and mine, growing up.  Sadly, even though there are approximately seven billion Garfield toys, there are approximately zero Doc Boy toys, which makes her kind of difficult to shop for. (In retrospect, we probably should have based our perennial tradition around a more widely beloved character.)

But the holidays aren’t just about finding the perfect gift for someone. (You can take that from me. I’m someone who almost never has.) For my family the holidays are about many things, and one of them is apparently called a charcuterie board. Another of my beloved cousins has informed me, charcuterie has become quite trendy, in the last few years, among hipsters. My family has always referred to this sacred dish as simply “The Tray.” (We were ahead of the curve on charcuterie. Maybe Doc Boy merchandise will be the next big trend! Who knows?) So, as I anticipate “The Tray” with delight, Merry Christmoose  to all  and “DON’T CALL ME DOC BOY!” 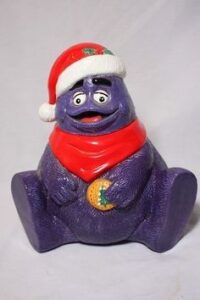