Let me tell ya friends, being a freelance columnist/cartoonist who suffers from crippling ADHD might sound like an awesome career path, but it hasn’t exactly been a day at the beach for me. In fact there are days, or more accurately, months, when I totally forget what I’m supposed to be doing , and November 2021 (It is still 2021 right? Correct me if I’m wrong about that in the comment section.) has been one of those months.

As often happens, I got sidetracked and some important November holidays I had planned on writing about for this site got lost in the mire that is my mind, but I am here on this last day of November to amend that.

So, without Further adieu, I’d like to wish to you a:

Traditionally celebrated on the Fourth Thursday of November  in the United States and referred to by some as “Thanksgiving,” Blake’s-Giving is a holiday one of my friends and I came up with one year where we decided to show our thanks to actress Blake Lively for wearing a bikini and blowing up a shark by watching her underappreciated  classic movie The Shallows.

Why  we decided to do this is on this particular day is inexplicable, even to us, but not as inexplicable as me forgetting to wax nostalgic about The Star Wars Holiday Special!

On November the abomination known as the Star Wars Holiday Special had it’s grand debut. It’s easy to find on the internet nowadays, and they even have a Rifftrax for it,  but back in the day, it really was a chore to get a bootleg copy of this particular travesty.

For those not in the know , it features the first appearance of Bobba Fett in a horrendously animated cartoon short, Chewbacca and his family grunting at each other, celebrating Wookie Life Day, Bea Arthur doing a musical number for the drunk aliens at the Mos Eisely Cantina. Also,  Mark Hamill wearing pancake makeup, Harrison Ford who looks like he wants to kill himself while hugging Wookies and Carrie Fisher singing words to the Star Wars theme song. ( She was too drugged up at this point to be embarrassed by anything.) Oh, and the band Starship playing a song which goes on for twenty minutes that I swear they made up on the spot  when someone told them they were going to be in the Star Wars Holiday Special.

Make Them Die Slowly is an infamous Italian cannibal  movie from the 70’s wherein multiple animals and people might have actually been killed. It’s one of those movies people dare you to watch like Faces of Death. It was banned in a whole bunch of countries and most of us couldn’t even make it through the trailer for the movie they had at the beginning of the tape. But somehow,  later on, when we had easy internet access to the Star Wars Holiday Special, we realized we had actually lucked out by getting Make Them Die Slowly instead. It was way less disgusting.

But speaking of things most internet weirdos like me also already know about, I feel it is my obligation to whish you another happy belated November holiday greeting:

On November 22, 1987, a guy in a Max Headroom mask managed to hack not one, but TWO Chicago TV stations. He burst through the frequency of WGN during a sports cast, but the sound wasn’t there, so the sportscaster who was baffled,  literally said, “If you’re wondering what just happened, so are we.”

After they got kicked off that broadcast, they decided to target the local Chicago PBS affiliate, during an episode of Dr. Who. These pirates were clearly targeting WGN. To this DAY nobody knows who did this but folks, I’m gonna let you in on a little secret. I KNOW who did it! the names of the culprits are (BZZZTT!) 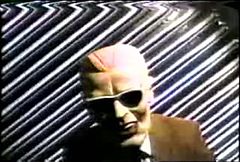