The Mandalorian is Awesome, but it isn’t as Awesome as the Star Wars Play my friends and I put On In Eighth Grade.

Mooseheads, I  love  The Mandalorian.

John Favreu is one of the best humans ever. He is an  amazing director, and was great in the Iron Man and Avengers movies. And he was in Swingers!  (I LOVE SWINGERS!!) But now he’s “all growns up” and swingin’ in the Star Wars universe.  The guy is just an endless font of talent. He’s directing and writing The Mandalorian, which is  a show that actually makes Boba Fett look competent.

Of course, we all know who Boba Fett is. He was a bounty hunter in the movie, The Empire Strikes Back, who captures Han Solo, to take him to Jabba the Hutt. And everyone thought he looked super cool, but I, personally, always thought the lizard guy, standing next to him, was way cooler looking. (And, yes, I know the lizard guy’s name is Bossk. I was a geek before you were born) But, then, in the next movie, The Return of the Jedi, he just dies, stupidly, at the beginning of the movie, without even really doing anything.

For some reason, Boba Fett became ridiculosy popular, because of the way he looked.  And, as it turns  out, he was wearing  the armor of a Mandalorian, which is an order of bounty hunters. (We learned this information over 20 years later)

Now, here is a fun fact: Boba Fett first appeared in the Star Wars Holiday Special, that came out right after A New Hope, and in between when The Empire Strikes Back came out.

I know that sounds like a joke, but it happened.

The Special also had an interminably long musical number wherein Bea Arthur sang and danced with a bunch of aliens, in the Mos Eisley Cantina, and it ends with a clearly drugged up Carrie Fisher, singing words to the Star Wars theme music.  (This was the 70’s and all kinds of weird shit was going on)  The Boba Fett cartoon in the Special is universally considered to be the only part that doesn’t completely suck. Even though it was both horribly drawn and animated,  you could still tell that Boba Fett was supposed to be a badass. (If you ever do attempt to watch the Special, watch the Rifftrax version, although, even they couldn’t really make it enjoyable, but I do love those guys)

Now, Mooseheads, like most of you out there in internet land, I belong to over 150  different streaming services. The only reason I subscribe to Disney Plus is so I can watch The Mandalorian (and wobbly old black and white Mickey Mouse cartoons like Steamboat Willy) but The Mandalorian is really good. And I want to adopt “The Child.”  I would go so far as to say that it’s even ALMOST as good as the Star Wars play my friends and I put on in the eighth grade.

We didn’t have John Favreau as a director  (or any director at all) but we had gumption. And a sincere desire to get excused from class, so we could go and paint murals of Jabba the Hutt, instead of being in Math, not understanding what a multiplicative inverse was.

Moosefriends, we did this this before being a geek was trendy. So, there was absolutely no reason that we should  have put on an amateur production of the Return of the Jedi, but I guess we all must have suffered severe brain trauma at the same time, and decided we should do something that would insure none of us ever get girlfriends.

And we must have suffered that same brain trauma two times, because we actually put on the play TWICE; once in seventh grade and once in eighth grade!

Back before Star Wars and Superhero movies became popular again, there were exactly zero sexy, cosplay chicks in existence, who wanted to date guys like me, who like sci-fi and superhero shit. If they saw you in a Yoda costume, they would look at you with the same disdain normally reserved for looking at people who murder puppies. These girls would not even bother wasting their time on insulting you. They would just get away from you as soon as possible, if you attempted to talk to them.

We couldn’t even get an actual girl to play Princess Leia, so, our friend, Rob, did it. (He probably has blocked this traumatic experience from his memory)

But, getting back to the Star Wars play. The one we did in seventh grade was really bad, and I honestly don’t even remember anything about it, because nobody video taped it.

I have a recording of the eighth grade play and it was a fucking masterpiece. Shakespeare would have been proud of.

I put on a Master class performance.  I played Yoda, and Han Solo, AND The Emperor!

We had a carboard cutout playing R2-D2.

When we did the scene where the Emperor shot Luke Skywalker, I just kept pointing my finger at my friend who was playing him, and we had a guy flicking the light switch up and down in the classroom,  because, we thought, me, having actual lightening bolts shooting from my hands, might possibly endanger the other students.

Also, I had to memorize the entire Yoda death speech and try to say it through a shitty Yoda mask that I couldn’t breathe through, that I got at a  local Halloween store.

But one friend of mine, who played Boba Fett in our seventh grade production (See, this brings me back to The Mandalorian subject, so that’s why I talked about it ) insisted that we use actual pyrotechnics for Boba Fett shooting a flamethrower out of his arm.

See, they don’t let you do that kind of stuff in a classroom. Everyone of us understood that, but he didn’t. He kept saying “Pyrotechnics means CONTROLLED FIRE!!!”  And we would have to keep responding with things like, “Yeah, I get that, but they probably aren’t even gonna let us use any kind of fire in a Language Arts classroom, whether it’s controlled or not.” But he just didn’t understand that and  got pissed off and left. So, he wasn’t in our eighth grade production.

I hope he is doing well, and I am sorry that the rest of us hurt his feelings, by telling him that setting fires in school classrooms is not a thing they allow you to do.

I asked my one friend who it was we got to play Boba Fett in the second play, and he didn’t know, so he just told me to say Collin Hanks (the way less famous son of Tom Hanks) even though, I’m pretty sure, that isn’t right, but you can’t tell, because the kid is wearing a mask.

Also, for reasons known only to him, the kid playing Obi Wan Kenobi, inexplicably, started doing a Michael Jackson impression, in the middle of his final speech to Luke. I wish I could explain to you what that looked like, but I really can’t.

So, the last episode of the current season of The Mandalorian is coming up soon, and, thankfully, the last season of us putting on a Star Wars play is well in the past. 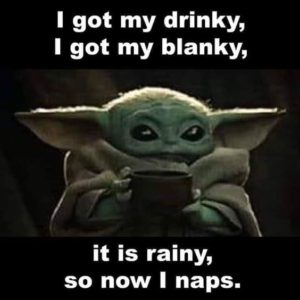