Believe it or not, ladies and gentlemen , this NickMoose.com website does not exactly pay my bills.  Which is why I haven’t posted in a while.
If I want to be able to afford beer, Sour Patch Kids and Slim Jims, I have to, on occasion, sell out and write columns  for other publications.
One of these is a newspaper in Medina County, where I grew up, called The Medina Weekly News.
When I applied to write for them, I thought it was going to be something like a Medina based version of the Weekly WORLD News!

And I was always a fan of the Weekly World News. You might remember it as the paper that you would see in the grocery store checkout aisle, that would have a cover story about the Argentinian Bat Boy running for president or Princess Diana having an illegitimate love child with the Loch Ness Monster. (These are the types of topics I feel comfortable writing about.)

Well, as, it turns out, The Medina Weekly News is a bit more conservative than that, and they do not feature stories about bat-mutants or monsters.

The weirdest cover story they have had is one about that guy who went to the same high school I did , who won a zillion dollars on Jeopardy, and then lost because he didn’t know the difference between Venom and Spawn. (Seriously, dude? If you are a big enough geek to win at Jeopardy a hundred times in a row, how could you not know the difference between Venom and Spawn!?)

So, they wouldn’t publish the column I wrote about “The Lake Medina Monster!”

But, I’m the editor in chief of this site! So, I’m gonna give my Lake Medina Monster column a second chance!!

Now, keep in mind, this column was written for a newspaper where my elementary school bus driver might read it, so there will be no swearing or references to alcohol abuse in it!!

Given that this is the Halloween season, I’m going to indulge in my fascination with the weird, terrifying, and 100% untrue, to turn a seemingly innocuous local lake into something far more menacing than it actually is.

According to the Medina County Park District website, Lake Medina features “hiking, fishing, biking, canoeing, and cross-country skiing.” But do you know what Lake Medina does NOT have? The one thing that can turn any lake into a guaranteed tourist attraction?
A monster.
Now, hear me out on this.
I know it’s long since been proven that the most infamous footage of Bigfoot was a hoax, perpetrated by a guy in a store-bought gorilla suit, and The Loch Ness Monster photo was, likely, a picture of a suspicious looking plank of wood. But there are a zillion gullible people out there (like me) who still want to believe they do exist.
Which brings me to South Bay Bessie, also known as the Lake Erie Monster. Sightings of this snake-like creature date back as far as 1793. And in 1993, while I was fishing near my aunt’s house in Sandusky, I SAW HER!!
OK, full disclosure, I didn’t really see her. (I definitely saw something, but I think it was a turtle or a rock.) That doesn’t matter though, because you don’t need an actual monster to make your lake famous, you just need to TELL people you saw one there! Word will spread, and before you know it, your monster could have its own reddit page, and a minor league hockey team named after it!
As many of you know, this success story happened with Bessie. The Lake Erie Monsters hockey team (Now known as the Cleveland Monsters) was named after her. (Probably a good thing they didn’t call themselves “The South Bay Bessies” because that sounds more like a women’s rugby team.)
All you need to start your monster myth is a decently-sized body of water with a bench next to it. And let me tell you, Lake Medina has some really exceptional benches. I, personally, have tried all these benches, and found them to be extremely sittable.
The next step is you need an eccentric local to sit on a bench and spin tall tales about the monster, and I volunteer myself for this illustrious position. I grew up in Medina, and I own more than one hundred PEZ dispensers, which means, by definition, I fit the bill!
When any angler, who needs a break from a long day of not catching any fish, wants to take a sit down, I’ll be there, talking their ear off, about the beast. I’ll stare off at those rippling waves and say something cryptic like, “Didn’t catch any fish today, huh? Me neither. That THING ate ‘em all up first!”
So, now, we’ve got our benches, our body of water, and yours truly, playing the role of the loco local and that is really all we need to begin a Medinian monster mythos!
Before you know it, everyone will think they saw “Moosie!”

For the time being, I am calling it “Moosie,” because I am the one who will be pretending to discover it. But if you have a better name for the Lake Medina Monster, please send it in to the Medina Weekly News, and if I like your name better, you could win a Lake Medina Monster hat!  (If I can find someone who knows how to make hats.)

Tourism for Lake Medina will increase exponentially once word gets out about this soon-to-be legendary behemoth, and, mark my words, Medina will get it’s own minor league hockey team!

(Well, maybe not a hockey team. Maybe a minor league Whack-A-Mole team, if they have those.  We could call it the Lake Medina Monster Mole Mashers!)

Now, if you’ll excuse me, I am going to go babble about a beast, on a bench! 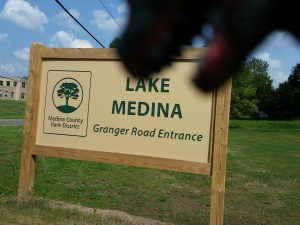 One response to “The Lake Medina Monster Revisited”