The Church of Burger Time

Did you know there is a church based around the 1980’s arcade game Burger Time?

I found this out recently and was intrigued. I’m no stranger to fringe religions, as I am a card carrying minister of the Church of the Subgenius. And they worship a guy named Bob, who is just a piece of clipart from the 1950’s, of a guy smoking a pipe, who encourages people to slack off and says that, if you join them, you either get eternal salvation, or triple your money back.

But this BurgerTime cult is news to me. And I’m surprised that it is, because Burger time is one of my favorite games ever. And I like burgers and time.

If some of you youngling Moosekateers  out yonder are unfamiliar with Burger Time, allow me to explain how it goes. You play as a chef named Peter Pepper. Peter Pepper is trying to make burgers by running around on a bunch of Donkey Kong-like platforms, climbing up ladders and running over various burger ingredients, like the burger, the lettuce, the bun and the cheese. Eventually, if you do well, all the ingredients fall to the bottom of the screen to form a burger. Now, I know this doesn’t sound like the most sanitary way to make a burger, but I like to believe his shoes are magical video game shoes and germ free.

The main obstacle to doing this is that you are constantly being chased by pissed off demented food items like Mr. Hot Dog, Mr. Egg and Mr. Pickle, who are Hell bent on killing you.

So I guess the Church of BurgerTime would probably consider Mr. Hot Dog to be their version of Satan.

I own an obscene amount of BurgerTime games. I have one for my Game Boy, one on 3DS, one for Atari, one on Wii-U, one of those mini-table top arcade versions and I think I have at least three versions of it on the Nintendo Switch. (The most recent one, BurgerTime Party, is super awesome, by the way! You should stop reading this and go buy it right now!)

I’m not the best expert at videogames. I love them, I collect them, but I suck at them. . When I used to play Goldeneye on the N64 with my friends, I would somehow always end up stuck in a sewer, shooting myself in the face.

But BurgerTime might be one of the few games I’m ACTUALLY sort of kind of good at. So, I can understand why people want to worship Peter Pepper.

I respect everyone’s religious beliefs. So, I respect those who want to worship a chef running from giant demonic egg, pickle and hot dog monsters while stomping on giant hamburger ingredients.

To each their own.

But that isn’t even the craziest religion I have heard of! Did you know there is a religion based on the PARTIDGE FAMILY!?

Now , if you are too young to know what BurgerTime is, you sure as fuck don’t know what the Partridge Family is , so I’ll attempt to explain it. It was this show from the 60’s about a family, kind of like the Brady Bunch but it sucked even more. Much like the Brady Bunch, the kids all played in a rock band, only they rode around in a garishly decorated bus. It wasn’t a good show, but I watched it constantly anyway when it was on Nick at Nite back when Nick at Nite showed shows other than Roseanne and How I Met Your Mother.

The theme song, “Come on Get Happy” was actually good. But then again, I like shitty bubblegum pop music from the 60’s and 70’s. I’m weird.

One of the kids, Keith Partridge, was played by David Cassidy. Fun fact, he is the father of Katie Cassidy from the Arrow TV show.  He eventually went insane, became an alcoholic and died. The actress who played his sister, Lori Partridge,  was  Susan Dey, who was really hot, but then she went insane, became an anorexic and got a role on Law and Order. And one of the kids was played by Danny Bonoduche, who was always insane, and then started beating people up and got his own reality show, and then became a wrestler.

You can see why there would be a church based around these people.

Believe it or not, the cult is not even as weird as the Saturday morning cartoon Partidge Family 2020 A.D , made by Hanna Barbera Studios. In the cartoon they inexplicably live in outer space and have a flying car and a robot dog. I’ll probably be writing an entire 500 word column about that show for my “Journey to The Bottom of the Hanna Barr-barrel” series of columns about the dregs of the Hanna Barbera cartoon universe.

But back to the church of BurgerTime.

I was raised Catholic, so I’m curious as to how similar BurgerTimeism is to Catholicism. Instead of Holy Communion, where you take the Host and drink the wine, representational of the body and blood of Christ, do they give you a symbolic burger and fries? Does the Priest wear a chef’s hat and an apron instead of vestments? Instead of Baptism, where they dunk you in Holy Water, do they just throw pepper in your face, like Peter Pepper does to the food monsters in the game?

What does their version of Hell look like? Does Mr. Hot dog put you into a giant George Foreman grill where you roast for all eternity?

I don’t know and I don’t want to find out firsthand.

See ya next time Moosekateers. 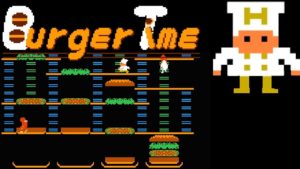