Back in the 90’s, I used to frequent weird underground comic book shops that sold illegal bootleg videos of things that you could probably be arrested for owning now. Like, this one place had Make them Die Slowly, which is an Italian cannibal movie which was banned in seven countries. I think they killed actual animals and maybe even actual people making it.

They also had an illegal bootleg copy of Legends of the Superheroes, which was this crappy 70’s variety show that had Adam West and Burt Ward reprising their roles as Batman and Robin, and that was somehow even more horrifying than Make them Die Slowly. I could write fifteen columns just making fun of the only two episodes that were ever made of that show. (If you want to see it now I’m pretty sure it’s on the DC online service.)

But the best thing I ever bought from this place was the entire collection of Johnny Sokko and his Flying Robot on VHS. It’s available widely now, but back in the day, you only heard whispers about it from myths and stories.

I first read about it in a VideoHound movie review book about Sci-Fi. They explained that it was like a children’s show that aired back in the 70’s. It was from Japan and it sounded a lot like Ultraman or Godzilla. Guys in big rubber suits beating the shit out of each other. So naturally I was sold on it immediately .

I bought a bootleg VHS copy of the first couple episodes, then I kept going back every week to buy the rest of them.

The bad guys are all Nazis who are lead by a guy who has an octopus for a head who tries to destroy the world with an increasingly dumbfounding collection of monsters like a giant flying hand, some giant vicious shrubbery and a giant vampire guy with a blue alien face.

The good guy is a little kid who owns a giant robot that looks like the sphinx who he commands. (I would explain how this happened, but it’s too complicated so you should just watch the show.) Even though Johnny is like six years old, he is immediately recruited by a spy originazation, which also already has a six year old girl working for them for some reason. Which is weird because she doesn’t even have a robot.

Every episode is pretty much the same. The bad guys attack with a big goofy looking rubber monster and Johnny commands the robot to kick the shit out of it.

The octopus headed guy has minions who looks like Destro from G.I Joe and the Hamburgler.

In the episode with the giant alien vampire with the blue head, the robot, who usually just fires missles out of his fingers, somehow gains the ability to shoot giant flaming crucifixes at him!

I mean Mary Tyler Moore turned off the lights to her office and that was sad, but she didn’t fly into space and explode herself while simultaneously  exploding a giant octopus headed guy at the same time.

They played the theme music to the show while he was exploding him, and Johnny was crying . The robot exploded. It turned out the robot had a soul for some reason that they never bothered to explain and he chose to sacrifice himself!  When Johnny cried, I cried.

I’m not gonna lie to ya Moosekateers, I really didn’t expect to be crying about the last episode of a decades old Japanese kids show about  guys dressed in cheap rubber monster costumes punching each other. I also cried watching the last episode of Sailor Moon, but that is understandable because that show was from my era, when I was a teen, and all the Sailor Scouts were cute girls in school girl uniforms with short skirts. So you can see why I’d be broken hearted by it ending.

Anyway, the moral of the story is, even if you are a badass macho man like me (stop laughing) you can still end up welling up, seeing a guy in a crappy robot suit, blowing up a guy in a crappy octopus head guy suit.

So don’t buy bootleg videos kids! Although, I’m probably the only human being who still owns a VCR so that advice is probably moot. So instead I’ll say..ummm..don’t do drugs! 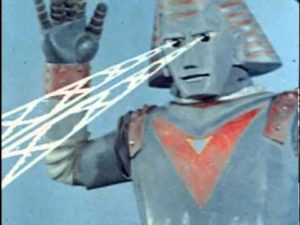