She is the one named Sailor Moose.

This is not me being funny (although probably a lot of you think I wasn’t ever being funny in the first place), but I, Nick Moose, have decided to adopt a daughter.

And the reason I’m adopting is because I have a weird-ass heart condition that I wouldn’t want to pass on to anyone. It’s called Truncus Arteriosis, which sounds more like a heart condition that an elephant would have, and my doctor usually needs to use Venn diagrams to explain to me what the fuck it even is.

He’s been doing this for over a decade, and I still don’t understand what the fuck it is, but it I know it’s genetic, and sounds like something I shouldn’t  pass on to a kid.

I’ve had my body sliced apart by surgeons enough, and been in more hospitals that I can count. I have a scar on my chest, and whenever I have sex with a girl, and I take my shirt off, they are like, “What happened to you !?” (usually I just say it’s a knife wound. That makes me sound way more badass)

Anyway, this is all super depressing stuff to talk about in my column, wherein I usually prefer to talk about fun things, like video games and toys and manatees .

So, let us move on to the fun stuff, shall we?

I’m way too old to fantasize about the Sailor Scouts now. That would just be wrong. But when I was roughly the same age that they are, I thought they were super cute. I may be too old to date teenage girls in Catholic schoolgirl outfits now, but I still think the Sailor Moon show was an awesome cartoon.

It had the whole girl power vibe going for it, it had a bunch of monsters, and two talking cats. (Incidentally, I have two cats and both of them refuse to talk. I don’t know what the hell is wrong with them! Maybe they are just being jerks!)

The Sailor Scouts never ,ever, sailed anything. (Or, if they ever did, I don’t remember them doing it) So, I have no idea why they called them that.

They all went to the same school and had secret identities and represented different planets.

The main character was Sailor Moon, but there was also Sailor Mars (She was the bitchy, raven-haired one, who was my favorite, because, I guess, I just am naturally attracted to bitchy, raven-haired girls, who don’t like me)  Sailor Mercury, Sailor Jupiter, Sailor Venus, and, then, later on, they brought in a couple of other Sailors  who were supposed to be lesbians, but we never knew that, because they weren’t allowed to say that they were gay, in the American version.

They do things differently in Japan. There were even characters who were supposed to be transexuals, but the American dubbed version disguised that too.  One time, someone was drinking coffee, on the show, but they edited it, to make it seem like it was hot chocolate instead, because whoever was editing it was, apparently, a Puritan or something.

Sailor Moon was one of the first anime shows they aired on Cartoon Network. The first was G-Force, then Speed Racer, then, of course, Dragon Ball Z,  which made Cartoon Network insanely popular when it was on the Toonami programing block.

I’d liked anime far before that, but I feel like Dragon Ball Z is what really made it annoyingly mainstream, to the point where you couldn’t walk through the mall without seeing some dork wearing some damn kimono with a picture of a Dragon Ball character on it, that they probably bought at Hot Topic.

Now, this is the internet, so, I know that the vast majority of people reading this probably are wearing kimonos adorned with Dragon Ball characters, and you probably all know that anime is usually adapted from Japanese manga, which always features girls and guys with impossibly huge eyeballs, and that the Japanese versions are absurdly violent and sexual.

But Sailor Moon was different because, it honestly, tugged at my heart strings. (As if  my heart needed one more problem. It was messed up enough already without getting it’s strings tugged!)  I actually cried, watching the ending of it, and I’m comfortable enough with my masculinity to admit that.

And I’m also man enough to admit that I shouldn’t have a son. Because my dad died when I was a kid, I never learned how to play football, or shoot a rifle, or a bazooka, or anything like that.  And I’m the last person who should ever give advice to a kid, regarding women, because, all my relationships have ended in apocalyptic disaster. So, I wouldn’t be able to give him any advice on women. (Not that I would have any problem with having a gay son! I can sympathize with him, because everyone thought I was gay, for years, back in my high school days  because no girls would go out with me.)

So, I decided I want a daughter. Even though I probably shouldn’t have a kid, because I’m a freelance writer and cartoonist, and neither of those jobs make anything even resembling money, and my friends tell me that having money is like a requirement for having a kid, or something.

Whatever, I’ll find a way. I’ll make it work! Even if it means going back to work at Dairy Queen, because someone needs to carry on the proud Moose Legacy!

I know she will grow up to be a strong, confident, badass superhero, just like her namesake.

To paraphrase the Sailor Moon theme song: Fighting evil by moonlight, winning love by day light! Never running from a real fight, she is the one named SAILOR MOOSE!!

Here is an image of the first stuffed toys  I will buy for her: 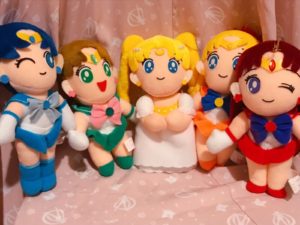