“Ice to see you,”  Moosefriends!

Yes, I just used an iconic pun from everyone’s favorite Batman movie, Batman and Robin, which was, of course, said by Arnold Schwarzenegger when he was portraying the supervillain, Mr. Freeze.

Truth be told, it’s nobody’s favorite Batman movie. Even the actors in it ended up hating it, and wanted to commit suicide, after being in it, and George Clooney publicly apologized for his performance.

But I like it, because it’s unintentionally hilarious, and it has puns, and George Clooney playing Batman. At one point, he uses a “Bat Credit card,”  which is probably the most insane thing to happen in a superhero movie ever. (Other than the Emo dance from Spider-Man 3) and when you watch it really late at night, under the influence of alcohol, you will laugh your ass off . Plus, it’s a lot like the intentionally campy 1960’s Adam West Batman TV show. And that show was the show where Mr. Freeze made his debut.

And it’s a chilly time of year, so, lets discuss a chilly subject.  Mr. Freeze ice pops were never as awesome as OTTER POPS!

You see, otters, themselves are adorable, and I would immediately adopt one, given the opportunity. (Remember when I said I would adopt a manatee in a previous column? Well, I wasn’t lying about that and I’m not lying about this )

Some otters live in Alaska, and Alaska is cold. This might have been the reason the Jel-Sert  Corporation stumbled upon the decision to make Otter Pops.

You’ve never had an Otter Pop, have you? No, you probably haven’t. Out of all the people I’ve talked to in my life (And I’ve talked to well over 35) no more than a handful of them have ever had anything but astonishment in their eyes when I’ve (Otter) popped that question.

That’s unfortunate though, because, if you haven’t, you are missing out on a great part of life, and you aren’t gonna understand what the fuck I’m talking about in this column.

Otter Pops are, in many ways, a lot like any other standard ice pop, just frozen juice in a skinny plastic bag that you could suck on.

But Otter Pops were better than Mr. Freeze ice pops, because Mr. Freeze just had a picture of a boring standard issue snowman on them, and Otter Pops had  a picture of a different damn cartoon otter on every pop! It was like you were sucking on an actual otter! (Well, no, not really. That would probably not taste as good, and the otter might not like that)

There were a whole bunch of different otters, and they all had their own shtick and personalities! There was:

And there were a bunch more  but I will not waste your time, or mine, by listing all of their names and personas, because you’ve probably stopped reading this already. I know, some of you don’t have time to read about fictional otters all day. As adults, we have more pressing obligations.  (I’m also making a desperate attempt to write shorter columns that come in at under 4,000 words.)

When I was in college, I was always bitching to my friends that I could never find Otter Pops anywhere, so they ordered some for me, directly from the company that makes them, for my birthday. (Side note: They should make beer flavored Otter Pops for college parties)

The Otter Pops have their own website and their own band, The Otter Pop Stars. So, apparently someone other than me must have heard of them.

I have a whole box in my freezer. So, if you ever wanna come over and chill, (See what I did there?) we can always hang out, and pop an Otter together. 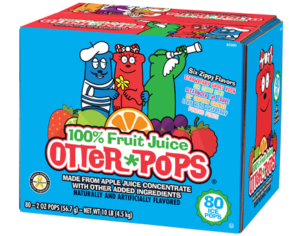 2 responses to “Pop Goes the Otter”