My Issue with the Elephant Issue of Zoobooks.

Now, listen up here, Mooseheads, I’m a fan of elephants. And not because my dad was a staunch Republican, who displayed a multitude of elephant sculptures on the mantle, when I was a kid, but just because they’re awesome.  I loved Dumbo. I saw that Operation Dumbo Drop movie, which starred Danny Glover, when I was a kid, wherein they drop an elephant out of a plane, in a complex effort to save its life. (Although, you would think that would more endanger the elephant’s life instead of saving it, but I was ten when I watched it, so, I don’t even remember what happened. I think the elephant was wearing a parachute.)  And I saw that Larger Than Life elephant movie which had Bill Murray in it, that came out at the same time. But that had less to do with me, loving elephants, and more to do with the fact that I’d watch anything with Bill Murray in it. (Even if it was a documentary glorifying Adolph Hitler, I’d probably still watch it, if Bill Murray was in it.)

So, as you can see, I’m quite the elephant expert, thanks to the cinema. But I didn’t learn all of my info about elephants from movies. Oh, no. Ya see, back in the 90’s, we used to have Zoobooks.

Now, this might be a difficult concept to grasp for some of you millennial Moosekateers, but back in the 90’s, there were these things called “magazines.” They were printed on this stuff called paper.

The 90’s was a crazy time, where people listened to ska-punk music, then went out and purchased, and read, things that were printed on paper. I was there! It happened!

Of course, one of the magazines I read was Playboy, but there was another one which was slightly more educational than that, which was called Zoobooks.  There are big differences between Playboy, and Zoobooks. Playboy featured  just a bunch of hot, naked women, where as,  Zoobooks was about animals, and was slightly more child appropriate. And also, you couldn’t buy Zoobooks at the store. You had to order a subscription.

So, they would air these ads on TV, incessantly, which pissed mothers would have to endure, while their kids were watching Cartoon Network.  Seriously. These ads came on during every commercial break of every single show, and sometimes twice in the same commercial break, until the mother was driven to the edge of madness, and agreed to subscribe to Zoobooks.

And one thing every Zoobook ad had in common was that they said, ” If you subscribe now, you can get the elephant issue for free!”

Now, here’s my issue with the elephant issue, Moosefriends: It’s fine, and elephants are cool, but, I don’t understand why they kept pushing it so hard, as a selling point.

I mean, they could have made a Zoobooks issue about a Spiny Lumpsucker, or a Goblin Shark, or a Raspberry Crazy Ant, and used those species to  entice people to buy the magazine. (Full disclosure, I have no idea about what any of those animals even are. I just did a Google search for animals with funny names.)

But I do know some stuff about elephants, none of which I learned from the elephant issue of Zoobooks.  Because, frankly, I don’t think I ever even read that one. (Maybe that was why it was free. Nobody ever wanted to read it.)

Anyway, I don’t know anyone who ever was a kid in the 90’s who didn’t have  the Elephant issue. And Maybe Zoobooks just had a surplus supply of the issue and just wanted to get rid of them,  but a little bit later on, Zoobooks did wise up and decided to make a dinosaur issue and have that be the free one to bait people to want to subscribe. I don’t think there have ever actually been any dinosaurs in zoos, but I guess they made a Zoobook  about them anyway  because kids like dinosaurs more than elephants. (I mean, I’ve seen a giraffe and an octopus and a gorilla at zoo, but never a T-Rex.) So to close out this column, I’m gonna leave you with a picture of the infamous elephant issue!  Here it is! 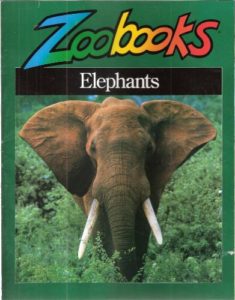