Well, I guess the holidays aren’t exactly “happy” this year for anyone, because we all have to have get togethers while suffocating in masks. (Have you ever tried to eat Honey Baked through a mask? I haven’t, and I’m pretty sure you can’t, but I’m gonna attempt to, because Honey Baked Ham is awesome!)

But, then, the holidays are never really happy for me. I’m always on Santa’s naughty list. I dunno why. Maybe it’s for having impure thoughts constantly, or because I swear constantly. Hell, even some of the comments I’ve posted on Reddit could be enough to get me shunted onto the naughty list.

But I’m trying to be a better person! I’ve started recycling my beer cans, I’ve volunteered to assist in the rehabilitation of wounded alpacas, and also to give emotional support therapy sessions to those alpacas!

So, I think I deserve to be on the “Nice List” this year. And, because I’ve been so nice, I have a wish list of demands for Santa Claus:

Anyway, I might not get a manatee for Christmas this year. There are a lot of people who, tragically, don’t get manatees, and Santa needs to work on having a more efficient manatee delivery system.

But I’m still happy that all my loved ones are still alive and intact. That is the greatest gift of all.

Well, that and Doc Boy in the Garfield Christmas Special. (Have you ever watched that? My cousins and I think it’s the funniest thing ever, whenever he says, “Don’t call me Doc Boy!  You just need to watch it, to understand) 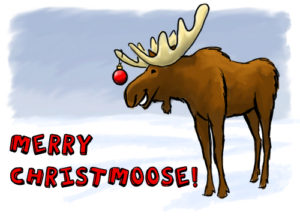