Oliver Wendell Holmes once said, “The first woman was created from the rib of a man. She was not made from his head to top him, nor from his feet to be trampled on by him, but out of his side to be equal to him.”

It gives one pause to think, “What would Holmes have said of the McRib sandwich?”

You see, Moosefriends, women can be elusive creatures. Sometimes they love you, sometimes they leave you. Sometimes they make you pick them up from some weird hippie guy’s apartment, in the middle of the night, and then make out with you in the back of your (understandably) aggravated friend’s car, and then never speak to you again.

But, as many times as I’ve been tortured by girls, I still love them. I’ve always been a hopeless romantic, just like the Bouncing Souls’ song. If you’ve never listened to the Bouncing Souls (and I’m sure you have not, because nobody listens to punk rock anymore), go and listen to them right now. (Listen to “Hopeless Romantic” and “Say Anything” first. Those are their best songs).

A lot of these girls I have been with remind me of the McRib sandwich from McDonald’s. Not just because of the Oliver Wendell Holmes quote, but, because, they get you to fall in love with them, you crave them, you think you are gonna have them around for a long time, and then they disappear. They are there for one minute and gone in 60 seconds. (Just like the Nicholas Cage movie)

If you’ve never eaten a McRib, you have wasted your life, and I feel sorry for you, but I will attempt to explain what it is. The McRib is like a burger, but it’s got rib meat on it, with BBQ sauce, and pickles, and onions. (Damn it! Even just describing one makes me want to eat one right now! ) Usually it’s a seasonal thing. They bring it back around the holidays.

I had a girlfriend like that once. We would be madly in love with each other and then she would just wander off and call me, randomly, right before Christmas. Then, we would get together, and she would leave, and we wouldn’t see each other again until another holiday season. Moosefriends, I refer to this particular phenomenon as being “McRibbed.”

It means something you love is given to you and then snatched away.

By the time you read this, McDonald’s probably will have already removed the McRib from their menu. And my old girlfriend will have probably shown up and then removed me from her menu.

I love women, and I love McDonald’s, and here’s a fun fact: I look exactly like Mac Tonight, the weird, moon-faced mascot they had in the 80’s, who rode around on a cloud, and played the piano, to advertise McDonald’s being open at night. He and I are both musicians, we both wear sunglasses at night ( just like Corey Hart!), and we both have enormous chins.

Maybe that’s why girls sometimes decide to date me. Because, you know what they say. Guys with big chins have big….hearts. (Well, Jay Leno doesn’t, but the rest of us do.)

I’ll probably end up writing a ton of columns about McDonald’s, just like that guy over on the Dinosaur Dracula blog.  He’s some kind of alternate Earth doppelganger of me who likes everything I like. It’s weird).  I have one planned that will probably bore you to tears, because it will be excruciatingly long, and will be about how McDonald’s ripped off the concept of Mayor McCheese from Sid and Marty Krofft (Even though most people under the age of 60 have never even heard of Sid and Marty, or Mayor McCheese). Nobody will read it, but I’ll write, anyway, because I’m a masochist, which is probably why I keep going back to girls who consistently break my heart.

So, Moosefriends, as the singer of NOFX  once said, “Follow what I say, not what I’ve done.”

Don’t get your heart broken by taking a girl back, whenever she comes around at the holiday season, and then abandons you. Listen to Oliver Wendell Holmes! DON’T GET MCRIBBED!

Unless she’s rich. Because, then, she’s likely to have Honey Baked Ham in the fridge at Christmastime, and there is nothing better than a post coital Honey Baked Ham sandwich!

Well, maybe, the McRib is better. So, you should run out and try to get one, before they’re, again, gone for a year! 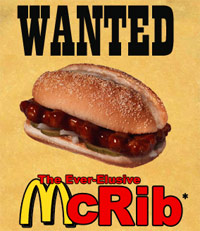