Larry vs. Jerry: War of the Worst. Round Two.

OK, Moosekateers, it’s time for round two of Larry vs. Jerry! LETS GET READY TO RUMBLE! (I’m gonna get sued for saying that because it’s trademarked.)  This is Part 2 in my two-part series about who was the worst director of all time, Jerry Warren or Larry Buchanan.  Yes, I’m sure you don’t know who they are, so, you probably didn’t even read the previous column.  But I’m still doing this follow-up column anyway because I love shitty monster movies that nobody watches other than me. (We all have our flaws.)

And speaking of flawed individuals, let’s talk about:

Jerry Warren:  Now, the biggest difference between Jerry Warren and Larry Buchanan was that Larry Buchanan took on a job. He wasn’t good at it, he wasn’t remotely qualified for it, but he did it, because he was asked to, and he needed money, so, he did it anyway.

Jerry Warren, on the other hand, was just a dick who also needed money, but chose to intentionally make shitty movies. He routinely lied to his actors about stuff, and then paid them with cheeseburgers. (Although, truth be told, I’d be willing to work for cheeseburgers right about now.  So, maybe that wasn’t such a bad deal!)

On a message board, I once read a post made by someone who said he had met him, and that he claimed that Jerry said, “Yeah, I really screwed those kids over, didn’t I!” (Referring to how he put out movies that teenagers would go to see and spend money on, despite the fact that they sucked, and he knew they sucked, even while he was making them.)

His best movie was called Man Beast. It was about Yeti’s, and a cult of people who, apparently, have had sex with Yetis, or something, to create hybrid Yeti people, which is illustrated by a guy showing that he has fur on his chest. (It was not good, but I liked it anyway because Yetis were in it and I like Yetis.)

They had a monster Yeti costume in that movie. I don’t know how he could have possibly afforded one, but my theory is that he stole it from somewhere.

Another of his movies, which was a failed attempt to be a Jules Verne style epic, called The Incredible Petrified World, starred an understandably embarrassed John Carradine, who he also, probably, paid with burgers.  They had a monster costume for that one too, but someone accidentally dropped it into the ocean (That person probably did not get any cheeseburgers that day), and they never found it. So, they just used stock footage of an octopus, instead.

He also made a movie called Blood of the Man Devil, which featured, once again, an understandably embarrassed John Caradine (He must have really liked his cheeseburgers!) and a desperate Lon Chaney Jr. who, probably, wasn’t embarrassed, because he was most likely drunk when they filmed it. (Fun fact: Lon Chaney Jr. drank a lot.)

In this movie, they have a scene where a guy is supposed to be turning into a werewolf, but they couldn’t afford that, so, they just put a crappy gorilla mask on him, and said he was a wolf.

Mexico had made a lot of monster movies, at that point. Most of them involved wrestlers called Lucha Libre, (which everyone should know by now are Mexican wrestlers, who wear superhero masks)  beating the shit out of monsters.  But that’s a long story, for another column, about K. Gordon Murray, who is another infamously terrible director, who imported Mexican movies, and ruined them.  I’m not even going to begin to start discussing him right now.

People say these Mexican movies Jerry Warren imported were pretty decent in their original form, but then, after Jerry got ahold of them, they became laughable train wrecks. The dubbing on all of them was so bad that I can’t describe it in words. You’d have to hear it.

Then he renamed them, and he called one Face of the Screaming Werewolf  (Which, admittedly, is an awesome fucking name for a movie ) and that movie also happened to star Lon Chaney Jr., who was probably so drunk he didn’t even realize he was in Mexico, making a movie about a mummy who turns into a werewolf. (But at least he got to play a werewolf and mummy again, like he did back in his halcyon days.) But then, Jerry also inserted terrible new expository footage into the Mexican movies, because he thought it would make them make more sense. It didn’t.

In one movie, he inserted footage of a morbidly obese actor named Bruno VeSota (Who was a great guy and, most definitely, got paid in cheeseburgers), getting a back massage, while he was attempting to explain the plot of the movie, which was ripped off from The Case of Charles Dexter Ward, which was an H.P Lovecraft story.  They shouldn’t have done that, because H.P Lovecraft is actually good, and this movie isn’t.

He also made a movie called the Wild Wild World of Batwoman,  in a failed attempt to cash in on the success of the Adam West Batman show, which was massively popular at the time, and, for some reason, he thought he wouldn’t get sued by DC comics. He did.

So, he changed the title to She Was a Hippie Vampire, even though there are no hippies in it, and no vampires.

Then, he he retired,  and lived on a farm somewhere for 20 years. After which, in the 80’s, he made an ill-advised decision to make another movie, even though he has said in interviews that he had not even watched a movie in those 20 years. So, he was a little out of the loop, regarding what the public wanted to see.  Still, he said,”What the hell,” and,  inexplicably, decided to make another one.

I know I say “inexplicably” a LOT, Moosefriends, but, in this case, I have a very good reason to.

This movie was called Frankenstein Island. It was about a bunch of guys, stranded on an island, with  women dressed like cave girls, and Dr. Frankenstein’s wife.  Frankenstein’s monster was chained up under water, and then, he escaped, and fought the guys, but the cave girls all had guns, and helped the guys fight him.

Also, there is a dog, and a drunk pirate, and ninjas in it. And John Carradine is in it it, even though he was already dead, at that point, but Jerry Warren just used old footage of him that he had, in which John Carradine  was just rambling about random stuff that had nothing to do with what was happening in the movie. (Even in death, John Carradine couldn’t escape being in bad movies! Poor guy!)

And the curse of Jerry Warren lived on even after he wasn’t making movies. He had made this movie in the 60’s which was another insane train wreck in which he spliced together two Mexican movies about mummies, and dubbed it terribly, and called it Attack of the Mayan Mummy.

Now, even though this stitched together movie has two different mummies in it, the people who distributed the VHS tape of it chose not to show a picture of either of those mummies, and, instead, found an image of some weird-ass puppet mummy thing. Nobody knows where it came from, but I want to know. So, if you know, please tell me! Have you seen this mummy? 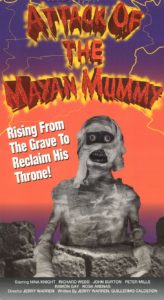