Larry vs. Jerry: War of the Worst! Round One

Now, listen up here, Mooseheads.  I have watched my fair share of terrible horror and sci-fi movies, and I especially am fond of the ones from the 1950’s and 1960’s.

Any true bad film connoisseur knows that Ed Wood was not actually “the worst director of all  time,” even though it became trendy to call him that. He was so weird that Tim Burton made a movie about him.

Ed Wood was a transvestite (No judgement here, but he was), and he made an insane movie about it called Glenn or Glenda, which didn’t make any money, but that not deter him. He still went on to make a bunch of other weird movies, like Plan 9 From Outer Space (in which, I’m pretty sure, the flying saucers were played by hub caps), and eventually, started making porn movies, and drank himself to death. (But, let’s face it, we’ve all been there. Haven’t we?)  However, if  you think Ed Wood’s body of work is bad, trust me, you ain’t seen nothing yet.

From that particular era, there are two directors who stand out as being the suckiest: Larry Buchanan and Jerry Warren.

I don’t, personally, hate their stuff.  I  watch their movies all the time, because I’m a masochist, and because I have insomnia, and they help me fall asleep. Those movies have a weird hypnotic effect that makes you pass out because of how tedious and bizarre and boring they are. Watching them is something akin to drinking a whole lot and then taking Benadryl.

Allow me to describe  the works of these two to you.  I’ll start with Larry.

Larry Buchanan:   In the 60’s, he directed movies for American International Pictures (also known as A.I.P), which were famous for their beach party movies and low budget monster movies.  Most of Larry’s  movies were  cheap jack remakes of movies that came out ten years earlier, made by the same studio, which were already pretty bad. But the studio wanted color versions of them to sell for TV syndication, because people started having color TVs around that time. (Everyone wanted to watch Batman in color!)

So, they gave Larry fifty bucks, and he went and made even worse remakes of movies that were already made, that nobody wanted to watch in the first place.

Like Zontar the Thing From Venus, (A remake of a movie called It conquered the world, which was about a big carrot-looking monster who shot bats out of his head, and SPOILER ALERT, didn’t actually end up conquering the the world) ,  Mars Needs women, (which, at least, starred Yvonne Craig, who played Batgirl on the Batman show, and who was super hot. May she rest in peace), and It’s alive!  which has nothing to do with another movie that’s also called It’s Alive, which was made in the 70’s by another guy named Larry. (I know, this stuff can be confusing)

That movie was made by a guy named Larry Cohen, who actually knew what he was doing. It was about a monster mutant baby, who crawled around, killing people. (Don’t all babies kinda do that?) The Larry Buchanan It’s alive! was about people trapped in a cave, with the lamest monster ever, who, I swear, had Ping-Pong balls for eyes. (Seriously, a friend and I once assembled a papier-mache octopus that looked more realistic.)

He also made two more movies that used the same Ping-Pong ball eye monster design. (Hey, if it ain’t broke, don’t fix it!) These movies were Creature of Destruction, which was a remake of The She Creature and  Curse of the Swamp Creature, which was a remake of Voodoo Woman. Both were also completely unnecessary remakes of terrible movies from the 50’s that nobody (other than people like me) liked.

And if you watch MST3K, you might be familiar with Attack of the Eye Creatures, which was a remake of Invasion of the Saucer Men, and actually titled Attack of the THE Eye Creatures. Yes, someone decided it was necessary to add the “Attack of the” part, even though the movie was originally just called “The Eye Creatures.” Then, they tacked it on, and forgot to take out the first “the.” So, the title has “the” in it two times.

Eye-ronically (See what I did there?) this is one of the few Larry Buchanan movies which does NOT feature monsters with stupid looking Ping-Pong ball eyes super glued onto their faces, because they used recycled costumes from another movie.

Larry, later, went on to make a movie called The Loch Ness Horror, which was somehow worse than the TV movie from the 90’s about the Loch Ness Monster, that had Ted Danson in it. (Although, I’m guessing Ted Danson probably doesn’t even remember being in a TV movie about the Loch Ness Monster, but, for some reason, I do). Then, Larry went insane, and started making weird, conspiracy theory movies, about how the government killed Jim Morrison, Janis Joplin, and Jimmy Hendrix. Then, he started making completely factually inaccurate convoluted documentaries about Marilyn Monroe. (He somehow resisted his natural inclination, and didn’t glue Ping-Pong ball eyes on the actors playing these iconic famous people).

But, he’s most well-known for those TV movies he did back in the 60’s, and one time, when he was asked about them, his eloquent response was, “I gave them what they wanted. Exposed film.”

Most people who watched those AIP-TV movies back in the day thought they just imagined them, because it was late at night, and they were drunk. But, no, it turns out, they were real.  And, yes, I own every single one of them of them on DVD. I even based my Rock N Roll Porpoise Man comic book on parts of the movie Curse of the Swamp Creature, even though the mutant in that movie looked awful, and only showed up in the last two minutes of the movie, and then immediately fell into a pool of alligators, and died.

Fun fact: Curse of the Swamp Creature starred John Agar, who was famous for being in westerns with John Wayne, and he was in a Creature from the Black Lagoon  movie (which actually had a GOOD looking monster costume in it), and for being married to Shirley Temple, at one point. But, then, he became famous for just being a drunk. (One common, recurring theme, in all these movies, is that they starred washed up alcoholic actors, who used to be famous, and they all knew the movies would be terrible, but they did them anyway, so they could afford to buy booze).

Next time, in Round Two of “Larry vs. Jerry: War of the Worst,” our next contender is Jerry Warren, who once tried to make a guy in a shitty gorilla mask look like a werewolf. So, strap in, Moosekateers! It’s gonna be a bumpy ride!

Now, I’m going to leave you with the picture of the Larry Buchanan monster from Attack of the Swamp Creature, so you can gaze lovingly into his Ping-Pong ball eyes. 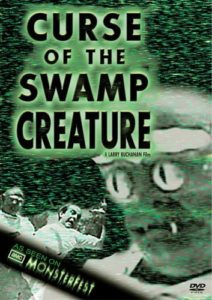