Journey to the Bottom of the Hanna-Bar-Barrel Part 2. The Paw Paw Bears.

This is the second installment of my series of columns that I call “Journey to the bottom of the Hanna-bar-barrel,” the column series where I make fun of the dregs of the output of my favorite cartoon studio!

This one is about the Paw Paw Bears.

Back in the day, none of us 90’s tykes had ever heard of “robotripping,” but if you’d asked one of us to make an educated guess at what that term might mean, we’d probably have said, “Is that like when you stay home sick from school, and take a bunch of cough medicine, and watch the Paw Paw Bears?” and we would be right.

You see, the Paw Paw Bears was a part of a hellish block of Smurfs rip-off cartoons that used to air in the early afternoon, when all the kids, who were old enough to not claw their eyes out, upon seeing them, were already in school.

The Smurfs have recently had a shitty CGI reboot movie.  So, you all probably know that they are tiny blue gnomes, who live in mushrooms, and say the word “Smurf” constantly. Like, whereas one of us humans would scream “MOTHER FUCKIN’ ASS!!” in a fit of rage, a Smurf would yell, “MOTHER SMURFIN’ SMURF!!”

The Smurfs originated in Belgium, and Hanna-Barbera adapted them for American TV. They were, inexplicably, a massive success in the 80’s, and I had a lot of Smurf crap, as a kid, even though, as an adult, I can barely even listen to the theme song without wanting to kill myself.

One of the Smurfs rip offs, The Snorks, was awesome. It had a bunch of weird looking sea creature kids who had weird looking, snorkel-like things protruding out of their heads. And they were friends with some sort of an octopus guy.

This show was vastly different than the Smurfs, because, instead of saying “Smurf” all the time, they said “Snork” all the time, like “MOTHER SNORKIN’ SNORK!”

Now, don’t mistake me, friends. Some of these shows did, in fact, suck more than others. (The Shirt Tales really sucked) but only one of them seemed to base the entirety of its premise on a deleted, peyote- induced, hallucination scene from Oliver’s Stone’s movie about The Doors.

That show was the Paw Paw Bears, and it was a delusional attempt to cash in on the popularity of both the Smurf craze, and the Care Bears craze, of the 80’s. Well, technically, the name of the show was just “Paw Paws,” but THE Paw Paw Bears is what I called it, back in my fever-induced, cough medicine-fueled hazes, on those long ago sick days, and I’ll be damned if I stop saying the “The” now.

It is quite possibly the only Care Bears rip off I can immediately think of, where the bears are all Native Americans, who worshipped talking totem poles, and fought a bear witch, who was riding on a vacuum cleaner, had the voice of Ruth Buzzi, and was named “Aunt Pruney.”

Anyway, the show was terrible, and unwatchable, but they made toys about it, anyway, because they made toys out of every cartoon that was on TV in the 80’s.  And, even though the show sucked, and I hated it, I would probably still buy all the toys on ebay, just  because there are a lot of things wrong with me. (For example, I just wrote a 600 word long column about the Paw Paw Bears, instead of writing about King Lear, or some other work of fiction that was actually significant)

See you next time, Hanna-Barbarians!  Until then, I’ll leave you with with this  picture of the the Paw Paw Bears  stuffed animals, and other assorted Paw Paw Bear  merchandise: 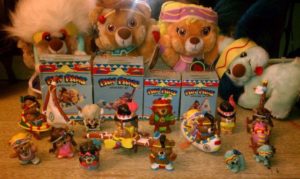