So, last night, I was watching Thunderball on TCM, even though I own like 17 copies of the movie on DVD collections and VHS. But James Bond movies, traditionally, used to come out around Thanksgiving. So, I was feeling nostalgic.

I was obsessed with James Bond, before Daniel Craig completely destroyed the entire franchise. (Although, I might be the only person who thinks Roger Moore was the best Bond. I also really loved Pierce Brosnan in the role.) I do love 98% of the Bond movies. And Thunderball is a really good one.

Domino, played by Claudine Auger is super fucking hot and so is the bad girl, who is played by Luciana Paluzzi.

Luciana Paluzzi was also in a movie called “The Green Slime”, which was a Japanese-American Co-production from the 1960’s, where midgets, dressed in rubber monster costumes, ran around, killing people, on a spaceship. I love it.

Anyway, the movie also involves sharks, because the bad guy has a swimming pool filled with sharks.  Which reminded me of another Thanksgiving tradition one of my friends and I have.

One year, for no reason that I could ever put into words, my friend and I decided to have a party where we watched The Shallows  which is a movie where Blake Lively fights a shark. We called it Blakesgiving. (We were the only two people who went to the party.)

Yes, I watched Gossip Girl, back in the day, and was always a fan of hers. So, finding out she was in a movie where she kills a shark was awesome. I forget how she killed it. I asked my friend and he said, “It

was complicated.” I don’t remember what exactly happened but, I think, somehow, she managed to strangle it.

Blake Lively and sharks is not the only reason I like Thanksgiving though.  I used to love watching the Wizard of OZ when they would show it all the time, (Because I love weird looking blue flying monkey guys) I used to love Turkey Day MST3K (I have not watched the new version of MST3K yet because I am afraid to.) I used to love watching the Macy’s Thanksgiving Day parade because they had all those fun pop culture balloons (Remember that time they exploded the Underdog balloon on Seinfeld?) My Grandma would be staying over at my house, and when Santa Claus came on at the end, she would scream, “SANTEE CLAUS! IT’S SANTEE CLAUS!!”

So, I still scream that to myself, in memory of her.

Now, if my friend and I would be doing a Blakesgiving , we would probably watch The Shallows again, but we would eat shark instead of turkey.

Do they even have pop-up thermometers for sharks?

I am obscenely fond of pop-up thermometers.

My cousin and I used to fight over who got the pop-up thermometer  from the turkey. She wanted to use it for a syringe for her nurse Barbie doll and I wanted to use it as a laser gun for my He-Man figures. (Obviously, this was the 80’s.)

I still have one of those thermometers  (And an absurd amount of He-Man action figures.)

This year, for Thanksgiving, I decided to go smaller. I just got a turkey breast. What can I say? I love breasts.

So happy Happy Moosegiving! Watch some shark movies and get a thermometer! 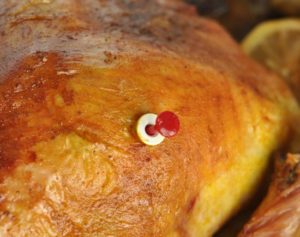 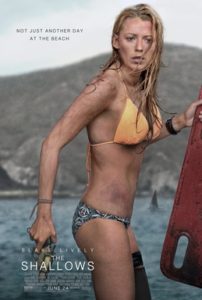