I’m building my own Chuck E Cheese on My Couch.

Ever since Covid has attacked, one of the unfortunate casualties of the disease is that I’m pretty sure they don’t have any Chuck E. Cheese pizza/arcade restaurants open anymore.

Now, don’t get me wrong, Moosefriends. I know a lot of adults DESPISE Chuck E. Cheese, but that’s probably because you can only buy two beers there whenever you go (I know this for a fact because I had a friend who worked at one in college and she threw me a birthday party at a Chuck E. Cheese. Trust me, they don’t let you get drunk, because of the kids who are there and because, if you DO get drunk, you would probably dive into the ball pit) No adult could possibly tolerate being around that many little kids, if they were only allowed to drink two beers. So, I’m trying to come up with a fun alternative.

I will never be an adult, or a parent, even though I’m hundreds of thousands of years old, so I don’t have memories of hating the place, like most adults/parents do.

I had that birthday party there, I went on a date with one of my favorite, most beautiful girlfriends, there. Wobbly, animatronic animals, playing musical instruments were there, and, most importantly, it was the first place where I ever played Pac-Man.

I am a super fan of Pac-Fan. I own like nineteen hundred versions of Pac-Man, and the funny thing about that is that I suck at it. I even recently bought a book by the guy who does the Classic Game Room videos on YouTube about Pac-Man, but it didn’t make me suck any less.

But I love it anyway. ( Right now, I’m even wearing a Pac-Man shirt, and I just bought a vintage Pac-Man glass they used to sell at Arby’s, even though it’s from the 80’s and I will never drink out of it, because I am insane, and I love Arby’s, and Pac-Man)

Fun fact: The design of the character, Pac-Man, was based on a pizza, with a slice taken out out of it.  Which sort of brings me around to what I was planning on writing about.

Chuck E. Cheese used to have dozens of arcade games, and some of them were vintage arcade games.

This was totally my favorite part of going to the place, as a kid. (I never really cared for diving into the ball pit, which may or may not have had other kids’ excrement in it)

Also, the pizza there did, in fact, suck. It tasted like Paper Mache. But you weren’t really there for the pizza. You were there the aforementioned arcade games, and wobbly animatronic bands.

Chuck E. Cheese himself was the mascot, and he had a bunch of animal friends who played in the band with him. (And one purple guy who kind of looked like Grimace from McDonalds.) This whole concept was ripped off from a place that used to exist that Chuck E. Cheese replaced. They had an animal band called the “Rock-A-Fire Explosion.”  There are people who are so pissed off about the Chuck E. Cheese band replacing the Rock-Fire-Explosion band that they make documentaries about it.  But Chuck E. Cheese was the version from my era.

And the games they had there were not just video games. They also had shit like Whack-a-Mole, which, for those of you sad saps who don’t know about it,  is a game where you hit moles on the head with a hammer. It’s amazing. It might not sound like it’s amazing,  based on the way I just described it, but it is.

Also they had claw machines.  Claw Machines come from Hell. One time I got so pissed off at one of them at the mall, because I couldn’t win a little tiny stuffed alien, that I kicked it, and the whole front of it fell off. I thought I was going to arrested, but the lady who owned the store actually gave me the alien and told me to leave.

They also had Skee-Ball. Skee Ball  is a thing where you throw these balls into a target to get points, and then you fuck it up, miss the target completely, and end up losing.

Anyway, the main point of that was that you would win tokens, and you were supposed be able to trade in whatever tokens you won, to get prizes. and they had a ball pit.

I recently bought a whole bunch of miniature arcade games that are small enough to fit on my couch! I’ve got miniature versions of Frogger, Burger Time, Pac-Man, Pong, Galaga, Galaxian, Centipede, Missile Command, and, more importantly, a mini Skee-Ball and Mini Whack-A-Mole!!

I’m gonna make an adult version of Chuck E. Cheese called Moose E. Cheese, where people come to my house, and play arcade games on my couch! And I will  have pizza, and let them have more than two beers! And I’m getting a ball pit! And a wobbly animatronic band! It’s gonna be awesome! 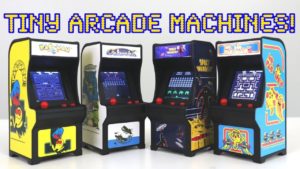