I Own a Wonder Woman Lunch Box.

Those of you Mooseheads who are fans of DC Comics know that Crisis on Infinite Earths was an attempt to consolidate the DC Comics characters into one universe, instead of having sixty million different universes, with versions of the characters living on different planets. (Which was recently adapted into a CW crossover series)

It was confusing, and, tragically, the original Barry Allen version of The Flash died in it, but it rebooted  DC Comics into something that was slightly less confusing than “Ulysses” by James Joyce.

But, now, we here in the real world, are experiencing a different crisis. I call it “The Crisis of Infinite Streaming Services.”

I subscribe to more streaming services than I can count or afford. And I recently subscribed to HBO Max, which brings me back around to my topic of Wonder Woman, because that’s the only way you can watch that movie, without going to a theater, suffocating in a mask, and sitting miles away from your friends. (And how can you even eat stale popcorn, that you spent twenty bucks on, through a mask, anyway?)

I really love Gal Gadot, playing Wonder Woman. She is awesome, and hot, and her portrayal of Wonder Woman was the only remotely good part of Batman vs. Superman. Plus, she has a really weird name, and if we were dating, I could call  her “my gal.”

Plus 98% of my comics are about beautiful girls, like Wonder Woman, although, unlike Wonder Woman, (who does not like guns) my girls all have weirdly themed guns. Satie De Sade has a pitchfork gun that shoots fire, Melissa Dusa is a Gorgon girl, who has a snake gun that turns you into stone, and Dairy Star has an ice cream cone shaped gun that freezes you. (Wonder Woman would probably not approve of any of these tactics.)

I had to watch Wonder Woman 84. A lot of people said it sucked,  but I watched it anyway, since I love wonder and women, and I love the year 1984.

That was, after all, the year Gremlins and Ghostbusters came out on the same day.  So, George Orwell’s dystopian view of 1984 was clearly wrong, because, in the year 1984, we were blessed with both Gremlins and Ghostbusters! It was no dystopia! It was awesome! But how the hell would you even be able to decide which movie to go to see if you had to choose between two of the best movies EVER!?

And the Ghostbusters thing sort of relates to my main topic.

Kristen Wig was in the awful, unwatchable reboot of Ghostbusters, where they were all played by annoying women, instead of the actors who originally played the Ghostbusters. (It was more like watching an episode of  “The View” than watching a Ghostbusters movie).  Kristen Wig, of Saturday Night Live fame, was, objectively, the least annoying of these actresses, and she did a pretty good job, playing Cheetah in Wonder Woman 1984.

So, I shall educate you Mooseheads who don’t.

William Moulton Marston was the guy who created Wonder Woman, and he wasn’t just a comic book writer. He was also a psychologist, and he also invented the lie detector.

So, I have a love-hate relationship with this guy, because I love Wonder Woman, but I hate the lie detector test. Every time I apply for a job, and they ask me whether or not I’ve ever stolen a baby manatee from a marine park so I could keep it as a pet, and I say “No,” it says that I was lying about not doing it. (Now, to be fair, I was lying, but that’s not the point. It still pisses me off, and it’s an annoying process. Why the hell do they keep asking me that question anyway?) This is probably one of the reasons why Wonder Woman wraps her lasso of truth around people, to get them to tell the truth, and find out if they have ever stolen  a manatee.

Another reason why she does that is probably because William Moulton Marston was also REALLY fond of bondage, and every single Wonder Woman comic book that he wrote showed her being tied up. For some reason, he equated girls being tied up with female empowerment. (So he must have been an awesome psychologist!) I’m all for girl power, although I fail to see how girls being in bondage empowers them in any way. But, if any of you ladies out there in Mooseland think that it does, I do happen to own my own pair of fuzzy pink handcuffs! I didn’t, personally, buy them, but I donated to a charitable organization for wounded kittens, and they gave them to me, along with a tote bag, with a picture of a wounded kitten on it. (That’s my story and I’m stickin’ to it!)

The Wonder Woman movies aren’t completely true to the comics, but I’ve liked both of them. The guy who plays the Mandalorian was in this one, and it was weird watching him do something where he wasn’t grunting through a Boba Fett mask, but he did a good job, and so did Chris Pine as Steve Trevor.

And  Chris Pine got to fly her fucking INVISIBLE JET in the movie, which is maybe the weirdest part of the Wonder Woman mythos. I mean, why would an Amazonian princess own an invisible jet?

From everything historical I’ve read about Amazons, they were, much like Wonder Woman, warrior women, who lived on an island, with no men. But the big difference was, they all cut one of their boobs off  so they could fire their bows better, and they did not have invisible jets. It would be way better if they had all had invisible jets, instead of cutting their boobs off. (They should have gone with the jets)

Anyway, I liked the movie, and there was a surprise guest star at the end (But I won’t give you any spoilers about who she is) The whole point of this column is to show off that I own a Wonder Woman lunch box. And here it is! Hope you all you Moosefriends have a WONDERful New Year! 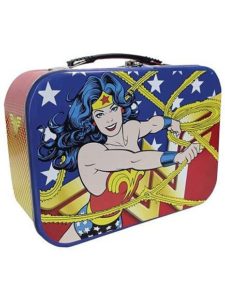