I know what a Pangolin is!

Have you heard about “Kid Scoop”? Of course, you haven’t, because it’s a thing that’s in newspapers, and nobody has read a newspaper since like the year 2006. But they continue to publish them for some reason, and, since I’m an old timey newspaper man, (I’ve been getting fired from newspapers since I was  a kid)  I continue to read them.

Usually, there is no content of any value in any of them. It’s just Associated Press crap, or on the Opinion Page, it’s more people bitching about politics, or some damn thing, but recently, I discovered a new page called “Kid Scoop.” It is intended to be for kids, but I have the mentality of a child, so I decided to read it anyway. I’m so happy I did, because now I know what a pangolin is.

You see, “Kid Scoop” is a newspaper page intended to both educate and entertain the younglings. And they, like I, probably had no idea there was an animal called a pangolin, that is a weird hybrid mix of a lizard, an anteater, a porcupine, and a Chia Pet.

Now that I have learned what a pangolin is, I want to adopt at least seven of them.  One of the main reason is that they eat ants, and I hate ants.  Well, I do like Ant Man and I like the obscure toy line from the 90’s called “Army Ants” which had tiny, Monsters in My Pocket-sized ants, dressed up like soldiers and wielding weapons. For some reason, they gave them all removable asses that glowed in the dark. The 90’s we’re very different times, friends; times where kids played with ants garbed in military fatigues,  with glow-in-the dark asses you could take off, and throw at other kids.

There was a fun quiz in “Kid Scoop,” wherein they make you try to decide whether you think a pangolin is a reptile or a mammal. (But, for some reason, they don’t give the answer! Fuck! I guess you have to wait for the next “Kid Scoop” to find out! Talk about a cliffhanger! )

Now, allow me to inform you about some other fun facts that I learned about pangolins from the “Kid Scoop” section of the newspaper:

The “Kid Scoop” page also had other fun and educational stuff on it. There was something about adjectives, and something where you had to search the paper to find five words that describe reptiles, and make a VENN diagram with them, and a pangolin-centric version of Sudoku. (I have no idea how to play Sudoku and I never will)

There was also a section on the page called “Similar  but Different,” which, for some reason, also involved VENN diagrams. (Do kids even know what the fuck VENN diagrams are? I’m a thousand years old and I’m still not entirely sure what they are!) So, for example, you’d have to say how bats and birds are similar but different. I guess I would say they are similar, because they both have wings, and they are different because bats sometimes turn into vampires, and birds usually don’t.

Well, I’m gonna go, and attempt to make a VENN diagram about that.  Thank you, “Kid Scoop,” for informing me about pangolins! Here’s a picture of one so you can decide for yourself whether or not he is a lizard or an anteater , but I love him either way. 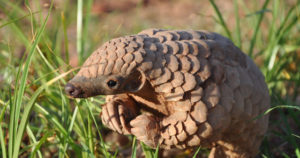