I Crave a Cave Babe. (Even though, according to the Flintstones, Cave Babes Never Lived in Caves.)

Ya see, ladies and gentleman, the Neanderthal is a topic I know a LOT about, because, as a kid, I used to watch The Flintstones all the time.

Wanna know a fun fact I learned from The Flintstones?  Neanderthals didn’t actually live in caves.

I think, most every human being has watched at least one episode of The Flintstones, because, back in the 90’s, Ted Turner acquired the Hanna-Barbera Cartoon Studios library, and paid an absurd amount of money for it. So, he came up with some kind of  corporate mandate that said The Flintstones had to be aired a thousand times a day, on almost every network he owned.  This was back when he owned  TNT, TBS, and the Cartoon Network (He also owned CNN and I’m surprised he didn’t find a way to put The Flintstones on there.)  But, if, for some reason, you’ve been living in a cave (see what I did there? ) for the last hundred years, they were a “modern stone age family,” who did not live in a cave. They lived in a house made out of rock, and they owned a saber tooth tiger (who was roughly the same size as one of my cats, Minky Boodle, who I feed too much.)

Also, they would get brontosaurus ribs at a drive-through restaurant, which were enormous, and would knock their car over, and they had a pet dinosaur, named Dino, who was, basically, a mash-up of a dinosaur and a dog.

See, if you haven’t ever watched The Flintstones, you wouldn’t know the truth about Neanderthal people.  Historians think they were monkey-like savages, who lived in caves, but this is not historically accurate. Thanks to Hanna-Barbera, I know the truth. They actually lived in houses, and wore clothes, and bought ribs at drive-through restaurants. Geico did a bunch of commercials with “cave men” (And then they made a crappy TV show about them which got instantly cancelled but even though those guys looked like apes, they lived in apartments, not caves.)

Any historian will tell you that “cavemen” ( And I’m gonna put “cavemen” in quotes because, clearly, they did not live in caves), and dinosaurs did exist in the same era. But that is fake news. Watch The Flintstones, and you will know that is just bullshit. There were dinosaurs all over the place on that show! And Hanna-Barbera wouldn’t lie about something like that!

But maybe they would, because, then, they made a show, in the 70’s, called Captain Caveman and the Teen Angels, which was an insane attempt to cash in on the popularity of Charlie’s Angels, featuring a superhero caveman in it, who shot pterodactyls out of his club. (And, before you even ask, the answer is yes. I will be writing an entire article about that show, at some point.)

But there is other evidence that “cavemen” and dinosaurs existed at the same time. There was a video game from the 90’s called Bonk’s Adventure, made for the Turbo Grafx-16 video game system. No kid owned a TurboGrafx-16, because everyone already either owned a Super Nintendo or a Sega Genesis.

Those consoles had Mario and Sonic the Hedgehog for mascots, but TurboGrafx had Bonk, who was a kid caveman, who had an abnormally large head that he used to “Bonk” enemy dinosaurs with.  So, his super power was, basically, head banging.  And, since nobody bought the TurboGrafx-16, they eventually just ported all their Bonk games to the Nintendo systems, which is why I first played  Bonk’s Adventure on a tiny little green unseeable Game Boy screen. But, I still learned a lot more from Bonk’s Adventure than I ever did from the Dinosaur issue of Zoobooks (Call back to my previous column!) For example, sometimes, triceratops dress like ballerinas, and ride around on ice skates, and you have to kill them by hitting them in the head with your head. That was DEFINITELY not in the Dinosaur issue of Zoobooks.  They should be ashamed of themselves for leaving out that important piece of information!

Now, the most pre-historically famous of “cave” people is probably Raquel Welch. She was in this movie that none of you millennial Moosekateers will have ever seen, called One Million Years B.C., and she was an inspiration for my comic book character, Prime Eve.  (Because she was a super hot girl and wore a fur bikini, and so is Prime Eve.)

Now, the lovely Raquel and her astounding cleavage were not the only reason to watch One Million Years B.C. . They also had stop motion animated dinosaurs.

Stop motion animation was a process perfected by a genius named Ray Harryhausen, who, apparently, didn’t have an attention span as short as mine, because he, somehow, managed to clay animate lots of dinosaurs. This guy did a version of stop motion animation which he called “Dynamation.”  The guy is an absolute hero to me.

Dynamation was pretty much the same thing as Claymation, which I wrote another thousand word long column about. But, since you probably didn’t read it, I’ll explain that the difference between Claymation and Dynamation  is that, when you do Claymation, you spend thousands of hours animating clay raisins, singing Motown songs, and funny dinosaurs, who host Christmas specials, whereas, in Dynamation, you spend thousands of hours animating fearsome murderous clay dinosaurs (who don’t host Christmas specials),  alien monsters, mythological creatures, and a giant octopus, which only has six tentacles. Here’s another fun fact: In the movie, It came From Beneath the Sea, they couldn’t afford eight tentacles to put on the giant octopus. So, Harryhausen  just said, the hell with it, and gave him six. (It wasn’t zoologically accurate, but it still looked cool.)

Anyway, Ray Harryhausen spent a thousand hours tediously animating a bunch of clay dinosaurs for the movie One Million Years B.C., but nobody cared, or even looked at them, because audiences were too busy looking at Raquel Welch’s cleavage. (You might recall the Raquel poster in Andy Dufresne’s cell, which helps him hide his escape hole, in the Shawshank Redemption. And, if you haven’t seen The Shawshank Redemption, I feel sorry for you.) In fact, I don’t even remember if the “cave” people lived in caves in that movie, because I was also too busy staring at Raquel’s cleavage.  I do remember, they lived in caves, in Ed Wood’s pornographic parody movie called One Million Years AC/DC, but don’t ever watch that, under any circumstances. (Trust me. If you do, you will regret it.)

So, now that you all have been educated, and know that cavemen and dinosaurs lived at the same time, and cave people had cars and didn’t live in caves, and cavewomen wore mascara and fur bikinis, here’s Raquel, rocking her fur bikini! 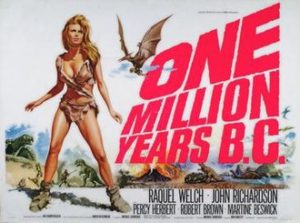