When my cousins, Sara and Emily, and I, were kids, we used to pretend we were characters on TV sitcoms that didn’t exist, that we  invented, ourselves. We performed these sitcoms in my grandparents’ basement (We were weird ),  and in the 80’s and 90’s, every single sitcom had a Christmas message at the end of their Christmas episode, where the cast said something like, “From our family to yours, have a merry Christmas!” So, we would do that that for our pretend sitcoms too. Only we would come up with our own holidays to do the greeting with.

My personal favorite was “From our family to yours, have a happy belated Martin Luther King Day! ”

Now, Moosefriends, as an adult, I’m not such a big fan of snow, because, now, I have to drive a car in it, to go and buy beer, and Slim Jims, and Sour Patch Kids, and excessive amounts of snow can sometimes make that difficult.  But, as a kid, I loved it because it meant they might call off school.

I don’t even know if kids actually GO to school anymore. Maybe they do, and  they sit there, suffocating, in masks, with desks six feet apart, or if they just watch it on their computers.

Those who get to watch it on their computer are the lucky ones.  My whole damn childhood was one long nightmarish going to school situation after another.

Although, I will admit, actually GOING to elementary school, physically, with all the bullies and mean teachers, will toughen you up, and get you ready for the harsh, cruel world you’ll have to deal with for the rest of your life. (And physically going to college will teach you how to drink, and be rejected by countless girls, most of whom are named Lindsay, for some reason. ) Although, I guess, the internet teaches you about how much the world can suck too (Just go and look at Reddit if you want a quick tutorial on that.)

But let us not look upon the darker things about elementary school, my friends, because, if I wrote about that, this column would be five million words long, and have the word “fuck” in it a thousand times.  Instead, let us focus on the good parts of elementary school, like the days when you didn’t have to go to it.

There were days off of elementary school for holidays, but we didn’t get Dr. King Day off, back in the day.  (We also never had off on National Cheese Lovers Day, which is coming up later this week  BTW , and you bet your ass I’ll be writing a column about it.)

Except for that one time, when we did get off school, and we didn’t just get a day off, we got an entire fucking week off!!

It started snowing on MLK Day and then, kept on snowing for the rest of the week!  So, I think, MLK blessed us from beyond, with the best snow day ever! Because it wasn’t a snow day, it was a snow FIVE DAYS!  We just got to stay home and watch cartoons, instead of getting our asses kicked by jocks, because we read comic books! It was glorious!

And speaking of comics, it was recently the 20th anniversary of the “Calvin and Hobbes” comic strip, which is another event we should be celebrating.  All this talking about snow reminded me of that “Calvin and Hobbes” comic strip series wherein they imagined killer mutant snowmen attacking them.  And, in turn, that reminded me of the slasher movies about Jack Frost, the killer mutant snowman, who murders women in bathtubs, which you should never watch, under any circumstances, even though I did. (As I’ve said, many times, follow what I say, ot what I’ve done.)

I own them both on DVD, but nobody else should pay money for them. (Don’t make the same mistakes with your life that I made, kids! Be smart, and think twice before you go to college, and get drunk, and decide to go to the mall with your friends, and spend money on killer snowman movies, because you thought it would be funny! The snowman movies aren’t going to be funny and it’s not worth the money!)

But I also own every “Calvin and Hobbes” collection ever published, and you should totally buy those.

I have a cat who looks uncannily like Hobbes! (I think I mentioned him in a previous column, but I will never stop mentioning him, so, don’t even hold your breath, if you are hoping for me to), and I think I also mentioned he was a rescue cat. (Even though  I think he might actually be a rescue tiger.)

I am also mentioning that I adopted a rescue animal so I could seem like I’m a better person than I actually am, and how I’m all altruistic and stuff.  I just donated money (I don’t have any money but I somehow donated it anyway, using a credit card) to an organization I heard about from my favorite actress, Tala Ashe, who, I’m sure, I’ve mentioned thousands of times in my columns.

It’s called Choose Love, and I’m pretty sure they give colored pencils to Iranian immigrant children, or something. (I don’t know, for a fact,  if that’s what they actually do,  because I only glanced at the website, but I will instantly  donate to anything she asks me to, because I like her, and so should you.)

Anyway, in the final “Calvin and Hobbes” strip, they go sledding, which is probably what many of us did on Martin Luther King Week.  I didn’t because I suck at sledding, and rarely even attempted to do it, until I was like 18 years old, and that was only because I was doing it with a hot girl who liked sledding, and she asked me to. We went down this absurdly gigantic hill and we both almost died. But, she was hot and it has always been my policy to do unnecessarily stupid things for pretty girls. So, I did it, even though I calculated there was a 90% chance doing it would kill the both of us. We didn’t die, though! But I guess you already know that because, if  we had, I wouldn’t be writing this. So, hooray for us for not dying!

Now the ironic thing about this column is that MLK stood up for Black people, and I’ve been talking about snow the entire time, and snow is white. But I believe in everything the man stood for.  I just happen to have this weird association with him and snowy weather, because of those glorious five days of no school.

So, God bless you, Dr. King, for all the things you did for the Black community, and for, somehow, magically getting me an entire week off from school!

And I’m gonna say this in honor of my beloved cousins: From all of us (Or, I guess it would be all of me) to all of you out there in Mooseland, have a Happy Belated Martin Luther King Day!! 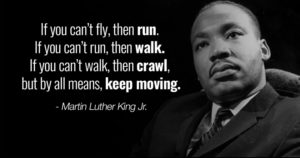