Graffiti on a Manatee is not OK with me.

Hunker down, Mooseheads, because this is gonna be a serious one.

You know it’s my usual policy to not discuss politics,  because I hate them, but I’m making an exception in this case, because I will also get to be discussing manatees. And if you’ve ever read my column even once, you probably know I like to talk about manatees incessantly. Hell, even if it’s not in my column, like if I’m at Applebees, or something, I’ll bring up the subject of manatees with the waitress.

Speaking of Applebees, one time, when my friend and I were there, a redneck yelled at my friend because he had the word “fuck” on his  shirt. (He also yelled at me even though I was wearing a yellow shirt that said PEZ on it. I don’t know what he found offensive about PEZ. Who doesn’t love PEZ?) Specifically, my friend was wearing a Nine Inch Nails shirt, with the lyrics to the chorus of the song “Closer”, which, and as many of you know, those lyrics are “I wanna fuck you like an animal.”

Now, in hindsight, it was probably a poor choice of a shirt to wear to Applebees. I’ll admit that. But that’s the sort of thing you do when you’re young. You wear super offensive shirts to Applebees, and get into fights with rednecks. I think, this guy slightly overreacted, though, because his girlfriend objected to the shirt. So, then, he threatened to kick my friend’s ass, so he could look more manly than he was, and then (spoiler alert for those who are waiting for the big screen blockbuster hit movie they will inevitably make about this) he pussed out, and did not kick my friend’s ass.  But, speaking of animals, and rednecks, that is a perfect lead in to my actual topic.

Having “fuck” on your shirt is far less horrible than having “Trump” written on your back.  But that’s what rednecks are doing to innocent manatees.

If you’ve ever read anything I’ve ever written, you probably have gleaned that I am absurdly fond of manatees. I saw one at Sea World when I was a kid, and loved it so much that I insisted on buying a plush manatee, which I still have and I was cuddling with it the other night.You probably think I’m joking about the cuddling thing but, sadly, I’m not.

But fun fact, boys and girls: back in the day, pirates wanted to a cuddle with ACTUAL manatees!!

That’s right, kids. A zillion years ago, pirates wanted to have sex with manatees, because they thought they were mermaids. They are not. Believe me. I’ve seen The Little Mermaid. Ariel does not look like anything even remotely resembling a manatee. (Another fun fact. Manatees are also known as sea cows, even though they look absolutely nothing like cows, sort of like how sea monkeys look absolutely nothing like monkeys.)

I learned this fun fact about pirates from a comic book, by the great Steve Purcell, called Sam & Max: Freelance Police. And even though I gained this knowledge from a comic book about a dog and a rabbit who drive around in a car, and pretend to be police officers, I still choose to believe it’s factually accurate, because it’s funny. (Side note: If you’ve never read Sam & Max comics, or played their video games, go and do that right now. You will not regret it.)

Now, while on the topic of comic books,  everyone knows who Captain America is because of the Cap movies and the Avengers movies.  I was a fan of him since I was a kid, (but that was before comic book movies became popular. So, if anyone knew you read them, you would get the shit kicked out of you by jocks. These same jocks now pretend they like comics, to pick up chicks, who pretend they like comic books, because it’s trendy. ) Chris Evans did a fantastic job portraying Captain America in the movies. And, no, that is not a pun about how he was also  in the Fantastic Four movies. (OK, yes it was.)

Cap was created by Jack Kirby and Joe Simon back in the 40’s. (Side note: The first thing Stan Lee ever wrote was a story in a Cap book. )

He was, as you all know by now, a wimpy kid who got injected with a serum, to make him super strong, so he could fight in the war. He was a symbol for everything America stood for. He reminded me of my Gramps (R.I.P) who fought in World War II. He was a great guy too, and even though he didn’t wear a star spangly outfit, he and Cap were both really nice people who wanted to punch Nazis in the face.

But a big difference between them was that Cap also punched guys with skull faces in the face, because his main enemy was The Red Skull ( a Nazi wearing a skull mask ) and, now that I think about it, maybe that’s why my Rock ‘N’ Roll Porpoise Man comic book is also about a blue guy, who punches a guy wearing a skull mask, in the face.

Cap even punched HITLER in the face! And, now, I think it’s high time he does that again.

Trump may not look like The Red Skull or Hitler (He looks more like a bloated orange guy who went bald, and then decided to buy the worst toupee ever) and  I probably should not be condoning violence right now, but Cap should punch this guy in the face. I mean, at this point, he’s earned it.

People have DIED because this asshole can’t accept the fact that he lost (Which, news flash, he DID!) And the MANATEES are suffering because of it!!

I’m all for some anarchy. I’ve been into punk rock since I was a kid, but the Sex Pistols and the Clash were actually promoting the polar opposite of this. They wanted to fight, to not be held down by a monarchy. The idiots who are rioting right now are fighting to be controlled by something even WORSE than a monarchy! They want a fucking dictatorship!

And, speaking of punk rock, have you ever heard of the Dead Kennedy’s album “Bed Time for Democracy?”  Probably not, but let me tell you,  it pretty much predicted exactly what’s happening right now.

And these rioting Republicans want their dictator for life to be a guy whose only qualifications to be President are that he’s super rich (which is hilarious, because 98% of the rednecks who voted for him can barely afford the lotto scratchers they spend hours buying, when I have to wait in line behind them for an interminably long time at the gas station), and because he hosted a reality show wherein his whole entire schtick was that he FIRED people from their jobs!

Or, I dunno, maybe they just like guys with bad toupees, who suffered third degree burns in a tanning booth. Either way, none of those things make Trumpy presidential material.  He is just completely unqualified, and I’m honestly surprised he’s lasted as long as he has. He’s like the Energizer Bunny of sucking!

He told everyone not to wear masks. His idiot followers listened to him, and a bunch of people died. Then, he was like, “Oh, wait, maybe we should wear masks!” which is not dissimilar to how  he told everyone to riot, because he was throwing a tantrum, and stamping his feet, saying “I WON, I WON, I WON!” Then they did, and even more people died.  Then he was like, “Oh, maybe you shouldn’t do that.”

Now, Moosefriends, I’m all up for a good riot, if it’s for a good reason. The Rodney King riots, the Black lives matter riots, and the peaceful protests like the May 4th one at my Alma mater, Kent State University, back in the 60’s, I fully understand those. But this has got to be the stupidest reason for a riot ever.

And it’s certainly no excuse to go out and deface an innocent manatee! Which, sounds unreal, but, apparently, someone actually did that.T hey wrote “Trump” on his back. (I call it a Trump Stamp, which is like a Tramp Stamp, only worse.)

This manatee did not approve this message.  Whoever did this had no way of knowing if this manatee was a Republican or not! This manatee could have been a huge Biden supporter!

And, now, this manatee defacer could be going to prison because he just couldn’t resist scrawling graffiti on a hapless sea creature.

Trump did NOT deserve to be President, and he CERTAINLY didn’t deserve to be in Home Alone 2 Lost in New York! He has tainted the franchise, and now, I will never be able to watch that movie again! Thanks a lot for ruining Home Alone 2 for me, Trumpy!

So, we need to call in Cap. And, possibly, the rest of the Avengers (Pretty much just because I want to see the Hulk smash these rioting Trump Thumpers.  A Hulk smash would beat a a Trump thump any day of the week.)

In Avengers Endgame, we see that Cap is able to wield Thor’s hammer, even though, in Age of Ultron, he pretended he couldn’t, but he was just being nice, because none of the other Avengers, besides Thor, could lift it, and he didn’t want them to feel bad because they weren’t worthy.

Trumpy is so unworthy that, if he tried to pick up Thor’s Hammer, his arm would probably fall off.

I’ve seen so many comic covers of Captain America punching Nazis in the face.  Maybe that punch would knock some sense into Trump’s thick orange head, and he would realize that he LOST!

So, now that Chris Evans is taking on the Cap role again, maybe he could suit up, and take on another dictator! Do it, Cap! Do it for me and the cows of the sea! 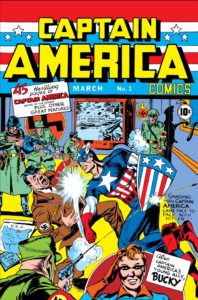 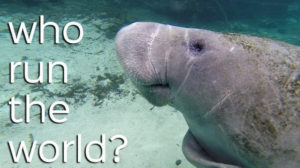 One response to “Graffiti on a Manatee is not OK with me.”