Don’t Monkey Around with my Heart

I was just watching Casablanca on TCM, and it occurred to me, that is the perfect Valentine’s Day movie for me, because it’s about a guy who drinks too much, and doesn’t end up with the girl, in the end, which is pretty much the story of my life.

But, there is another classic movie about love that I can relate to, about a guy who doesn’t get the girl, that they show a lot on TCM, and that movie is King Kong.

Rick, from Casablanca, may have never got the girl, but, I think, Kong had a rawer deal. Because Rick never had to fight a Tyrannosaurus rex and a Pterodactyl and stuff, and then get shot a whole bunch of times, and fall off the Empire State Building and die. (At least Rick got to be friends with that French guy at the end of Casablanca.)

I’ve never personally had to fight a Tyrannosaurus or a Pterodactyl for a girl (or maybe I did when I was super drunk, and I just don’t remember it.) but it sure feels like I have. And it DEFINITELTY feels like I’ve been shot through the heart a bunch of times, and fallen off the Empire State Building.

Let me tell ya, over the course of my life, there have been many beauties who have killed this beast.

As you observant Moosekateers may have noticed, I like girls a LOT, and I am a hopeless romantic, like Rick and Kong.

But in this Valentine’s column, I’d like to discuss another love of mine, my passion for Primates.

And, before you ask, let me preemptively answer your question. I don’t mean I’m SEXUALLY attracted to monkeys, apes, chimpanzees, and the like. I just think they’re super cool.

As a kid, I loved seeing the gorillas at the Cleveland  Zoo. My favorite was Timmy, and he was at that zoo for a long ass time, but they couldn’t get him to find a mate to produce an offspring. (I guess he just didn’t think any of their girl gorillas were hot enough.) So, they sent him to a California zoo, or something, and I hope he found love there, and started a happy, healthy, gorilla family.

I miss Timmy, but I still love seeing  gorillas whenever I go to the zoo. (I even own a Harambe memorial shot glass! No joke!) and I would like to adopt one, so he could live with me, in my house, along with my pet manatee. (If you look at my previous columns, you will see I’ve long desired to adopt a manatee. Still working on figuring out how to do that.) And, as I said many times, manatees are called “the cows of the sea,” and Sea-Monkeys are called monkeys of the sea.  I own Sea-Monkeys, and I hate to break it to you, but Sea-Monkeys are not monkeys. So, I wasted my money buying the Sea-Monkey aquarium, off of an add in a comic book, because, in actuality, Sea- Monkeys are just brine shrimp, and not tiny simians in SCUBA gear like I assumed they would be.

Fun Fact: Howey Mandell went insane back in the 90’s  and made a seriously disturbing Saturday morning children’s show with people dressed like Sea Monkeys that he thought would become as popular as the Ninja Turtles. It didn’t. (Do not google it. If you watch even one clip of it on YouTube you will have nightmares about it for the rest of your life.)

The whole Sea-Monkeys not being monkeys is a harsh life lesson every child eventually needs to learn. Also, they need to learn that, unlike Curious George, monkeys generally have tails.

Even now, I’m still infuriated that Curious George doesn’t have a tail. What happened? Did the man with the yellow hat cut it off when he got pissed off at him for something? If so, the Man in the Yellow Hat is  a jerk!

And, speaking of people who are jerks to primates, PETA is protesting against American Greetings Corp. for selling Valentine’s cards with chimpanzees in whimsical costumes.

Now, I’m not saying the American Greetings organization is composed of jerks (although, they are jerks, because they’ve never hired me)  PETA is though, because some of these chimps need work! It’s a gig economy, and it’s hard out there for a chimp!

I know what it’s like, getting a job, being a silly-looking simian, because I used to have to parade around in a crappy gorilla costume, at both the costume shop I worked at, and then, at the Dairy Queen where I worked!

I happened to have a gorilla suit, at the time (Don’t ask me how I obtained it, because it’s a long story.) but I learned, from personal experience, that everyone loves a goofy-looking primate!

A TV show from the 60’s, called Lancelot Link Secret Chimp, paved the way for chimpanzees being funny, and brought the concept  into the mainstream.

Now, here’s a little history lesson for you mini-Moosekateers, about the 1960’s. Back then, three of the most popular things were spies (like James Bond), psychedelic pop music, and drugs.

The producers of Lancelot Link must have taken a whole bunch of drugs, because they decided to make a show starring a talking chimpanzee, who was a spy, and played in a band, with a bunch of other chimpanzees, who all talked.

If PETA thinks greeting cards make chimpanzees look clownish, they would have a heart attack after watching one single episode of Lancelot Link.

But these chimps were getting work, whereas, other animals, like ocelots, were not. So, more power to them!

And some of their songs were actually pretty good!

Nowadays, little chimps have other role models to look up to, like Detective Chimp from DC comics, but Lancelot was probably the chimp with the most exposure, at the time.

And his namesake, Sir Lancelot, was in love with the Lady Guinevere, and the only reason I’m mentioning that is because it’s Valentine’s Day, and I wanted to circle back around to the whole love thing.

(I can’t believe I started out this this article writing about Casablanca,  and am ending it by writing about Lancelot Link Secret Chimp. I’m awesome.)

So, make sure you show some love to chimps that need work in these troubled times. Don’t let PETA ruin their careers! Go out and buy as many greeting cards, with funny chimpanzees on them, as humanly possible, and send one to everyone you’ve ever met! And have a Happy Valentines Day!

I love you, my dear Moosekateers!

Here’s a picture of Sir Lancelot Link. ( And now that I think about it, he does kinda look like Humphrey  Bogart.) 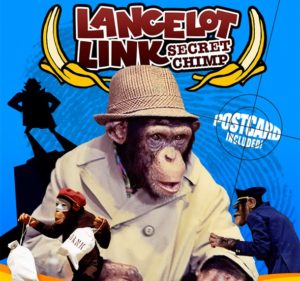