Don’t Avoid the Noid! He might just save your marriage!!

Seasons greetings greatings Mooseheads,! I was just wondering, have you ever had a friend who suffered a severe brain injury, and decided they should marry someone?

This unfortunate, tragic occurrence has happened to pretty much all of my friends. Now, don’t get me wrong. I’ve suffered my fair share of brain damage over the years too. As I’ve stated in a previous column, I am, in fact, a hopeless romantic, and would gladly marry a lot of girls, at this point. I mean, I’m still selective. I narrow it down to only just most of the girls I ever went to school with, who looked at me. Except for that one girl who looked at me weird, when I put on a puppet show in class, to illustrate some damn concept or something. (She looked disgusted. It was like she had never seen a puppet show put on in a college class room before. What a bitch!)

But, speaking of puppets, one of my best friends has, at least, found a way to make money off other people’s matrimonial misery!  He has become a wedding videographer! He gets paid to film the weddings of these poor saps, who are convinced they need to be married, and have elaborate weddings. (Even though the bulk of them will, more likely than not, be divorced within the space of two years.)

Two of the weirder weddings he has filmed have been the one where there were acrobats and jugglers, (which sounds more like a Ringling Brothers Barnum and Baily circus than a wedding)  and one where the bride was a fucking FURRY! For those of you who don’t know what a furry is, congratulations. Count yourselves amongst the lucky. (And, no, I won’t tell you what it is. Don’t Google it. It will give you nightmares)

But my friend tells me he has come up with a great way to spice up these wedding videos.  Since most weddings end up looking like crap, because everyone makes stupid speeches when they are drunk, he’s just gonna make them look better, by reenacting them with CLAYMATION!

For the benefit of you younger Mooseheads, not in the know, I’ll explain Claymation. It’s a long dead form of animation where you make characters out of clay, then take a picture of them, then move the clay figure slightly, and take another picture of it, and then, take a billion more pictures of it, and run them all together, to make it look like it’s moving around. It is the most tedious task anyone could ever possibly undertake, and it takes hundreds of thousands of hours to do it, and I can’t believe people never committed suicide while attempting to do it, but it looked cool.

In the 80’s, Claymation was ubiquitous. There were Claymation commercials about a fictional music group, called The California Raisins, composed of ambulatory raisins, performing Motown songs, like “Heard it Through the Grapevine” (who, apparently, sold out their other raisin brethren, to do commercials about how people should eat raisins), and they were also in a weird-ass Christmas special that was hosted by dinosaurs, which I won’t even begin to attempt to explain.

These Claymation things were produced by a great man named Will Vinton (R.I.P) but they did not even begin to approach the level of bizarre that his other Claymation creation, The Noid, did.

The Noid is known to most of you, because you probably watch Family Guy, and that scene where Adam West beats the shit out of the Noid, and then says “Perhaps the Noid should have avoided me,” which is a joke about how, in the 80’s, there was an insane amount of Claymation Domino’s Pizza commercials about how you should “Avoid the Noid.”

The whole shtick was that this little freakish gnome, who was dressed in a rabbit costume, would mutilate your pizza, and make it not be delivered on time.

Now, let me tell ya, Moosefriends, when I was a kid, Domino’s Pizza was my absolute favorite pizza. This is probably because we had exactly one pizza place in our neighborhood, and it was Domino’s. It was right next door to a sleazy motel (where God knows went on), and they didn’t even deliver to our house (even though they were located like five minutes away from our house).

But the Noid commercials were more about the locations where you could order a pizza and have it ACTUALLY  delivered to you. Then, the Noid would try to destroy your pizza, before it even got to your house, by employing radical tactics, like stomping on it with a pogo stick, or something.  But he would be heroically thwarted, in every commercial, by valiant Domino’s delivery guys, who were determined to get  your pizza to your house, fresh, and on time, and hot.

So, for some reason, Domino’s decided to have the Noid be their mascot. Even though the whole point of the character was that he hates Domino’s Pizza, and wants to destroy it, at all costs. They even made Nintendo games about him, and a ton of other merchandise.

Every one of these commercials was claymated by Will Vinton, and they were inexplicably successful, up until the faithful day that an insane guy named Kenneth Lamar Noid took over a Domino’s restaurant, and held the staff at gunpoint, because he believed the Noid ads were a personal attack on him. The police report actually said “He was para-Noid.” (which is easily the funniest fucking thing any cop has ever said)

So, then, Domino’s stopped the Noid advertising campaign, and tried  to come up with some other mascots, in a futile attempt to replicate his success. None did. One of them was Donny Domino, who was just a hip-looking, talking version of the Domino’s logo, and one was Bad Andy, who was a weird, Muppet- looking, monkey thing (the less said about him ,the better), but nobody cared about them, and I’m the only person who remembers them.

Meanwhle, the Noid’s legacy lives on.  Perhaps, he can make an appearance in one of my friend’s Claymation wedding reenactment videos! (I hope he also makes little clay versions of Vince Vaughn and Owen Wilson, to clay crash the wedding!) Maybe the Noid can play the part of the minister who marries the happy couple!

Of course, the couple will probably not be so happy, when the bridezilla sees that her wedding video is just a bunch of crudely animated clay figures, and has the Noid in it. And my friend won’t be so happy when she demands all of her money back, and threatens to kill him. Or, maybe he will be happy, because my friend is the type of guy who would spend countless hours on doing something stupid, that would result in tanking his career, only for the sake of being funny.

That’s probably why he’s my friend.

So, if you want to be Clay-Married, send me a message, and I’ll happily provide you with his information. 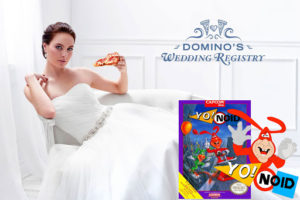 One response to “Don’t Avoid the Noid! He might just save your marriage!!”