Now COVID is really, really,  REALLY starting to piss me off even more than before!

If you’ve never watched television ever in your life ( And if you are a millennial Moosekateer, you probably have not, because you watch everything on streaming services) then maybe you don’t know what Gilligan’s Island is.

Similarly,  like I said in my previous column about The Flintstones, Gilligan’s Island was a show that used to be on TV hundreds of thousands of times every day on networks owned by Ted Turner. He owned the rights to Gilligan’s Island, and said “Damn it! I’m gonna show this thing over and over again, ad nauseum ’til I get my moneys worth!” And so he did.

Which is why anyone who grew up in the 90’s, and had basic cable, watched Gilligan’s Island all the time, even though the show was from the 60’s.

The premise was that this bunch of people went on a luxury cruise, on a ship that got fucked up because of the weather getting rough, and they crash landed on an island. (It’s all explained very well in the theme song and Bowling For Soup did an excellent cover of the theme song, which they were hired to do for a shitty reality show remake of Gilligan’s Island, which was like Survivor, but it sucked even worse, and nobody watched it, but the song was good.)

The ship they were on was called the S.S Minnow (And if you’ve ever watched the Bill Murray movie Scrooged, you would already have known that piece of trivia), and it crashed on an island.

They were called the castaways, but unlike Tom Hanks, none of them had volley balls with faces drawn on them.

They did, however, have hot girls who happened to be with them, and I think Tom Hanks, given the choice, would have preferred the hot girls, to a volley ball with a crudely drawn face sketched on it with a magic marker.

Now, the aforementioned girls were Ginger and Mary Ann.

But there was a similar situation on Gilligan’s island.

There were two super hot girls on the show. One was named Ginger, and she was this glamorous actress (with red hair, of course, because her name was Ginger), and she was played by an actress named Tina Louise. who was even more self-absorbed than I am, and refused to let any other character be sung about in the theme song, after they sang about her.

So, they sang about Gilligan first, of course, because the show was named after him (He was played by Bob Denver who, previously, played a beatnik named Maynard G. Crebs,  on a show called The Many Loves of Dobie Gilllis, which was also aired thousands of times on basic cable, when I was a kid, back when Nick at Nite didn’t suck. Believe me, it was way more fun to see countless reruns of Dobie Gillis than countless reruns of Rosanne.)

They sang about The Skipper of the boat next (Alan Hale, who went on to star in a bunch of shitty movies that were eventually put on MST3K, and then he opened his own sea food restaurant called “Skippers,” which I really wish I could have gone to while he was still alive.)

Then, the millionaire and his wife. The Millionaire, Thurston Howell, was played by Jim Backus, the same guy who did  the voice of Mr. Magoo, who is an ancient cartoon character, whose whole gimmick was that he was an old blind guy, and that’s why he ended up fucking things up. That concept would probably be considered offensive today.

Side note: I mean no offense to any blind Moosefans! Quite the contrary! I love blind people! Stevie Wonder, Ray Charles, Daredevil,  and that episode of Happy Days, where the Fonz goes blind, and Richie dismantles his motorcycle, and he has to put it back together, was an inspiration to me! (And, apparently, it was to Seth Mac Farlene too, because he made an entire episode of Family Guy about it. ) Anyway, Mr. Magoo was pretty funny.

I don’t remember the name of the actress who played his wife, so hang on, I’m gonna google it.

OK, her name was Natalie Schafer. The Howells were both super rich,  and that’s pretty much all you need to know about them.

And then there was Ginger, “The Movie Star,” as portrayed by Tina Louise, The Professor (who played by a guy who was previously probably only known for being in a movie called This Island Earth, which had an alien in it with an exposed brain and crab claws. That movie was also made fun of by MST3K, although, personally, I think it’s a masterpiece), and Mary Ann.

Now, in the original theme song, since Tina Louise refused to let anyone be be sung about after her, they just called it “and the rest.”  Eventually, they changed it, and put the actual character names in the theme song. And it’s a good thing they did, because The Professor and Mary Ann were very important to the show.

The Professor was always attempting to make communications devices out of coconuts, to contact someone, to get them off the island, and Mary Ann was just super cute.

Now, as I’ve previously stated, Moosefriends, I am a big fan of every flavor of girl. I had like sixteen girls who edited my column at the Kent Stater, and they were all named Lindsay. Just like Lohan. (Why is it that you are required, by law, to name your daughter Lindsay, just because she has red hair?)

But, I was always a Mary Ann fan. She was a brunette, cute and sweet, and had that girl next door vibe. So, you thought, if you saw her at the mall, and asked her out, she might have actually said yes.

But the actress who portrayed her, Dawn Wells, has passed away. So, I guess all of my childhood fantasies of running into her at the mall are moot now.

And Tina Louise is the last woman standing, because everybody else in the cast is dead, which sucks, because she wanted nothing to do with Giilligan’s Island, and wanted to do more serious work.

She didn’t even come back for the reunion episode, where the castaways met the fucking HARLEM GLOBETROTTERS, who, like Gilligan’s Island, also had a stupid Hanna-Barbera cartoon. I will write columns about both of those cartoons, because one is about the Harlem Globetrotters being superheroes, and the other is about the Gilligan’s Island characters being in outer space.)

Anyway, Dawn seemed like a really nice lady.. She appeared on Space Ghost Coast to Coast,  and the punk band, Squirt Gun, even wrote a song about her! I know you’ve never heard of Squirt Gun, because nobody has, other than me, because I’ve listened to every obscure punk band which has ever existed.

But seek them out, listen to their song, “Mary Ann,” and raise a toast to the cutest castaway!

Dawn Wells, to me, you will never be “and the rest,” but may you rest in peace. 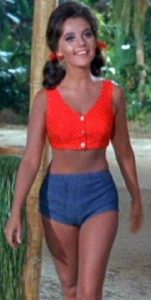