Listen up here, jr. Moosekateers! If you are young and dumb enough to decide to go to college, just know it is pretty much the same thing as voluntarily going  to hell.

90% of your teachers will hate you, all the people you wanna go out with won’t date you, and the friends you make will stab you in the back, the first chance they get.  The only thing you learn will either  be how to be a drug addict or an alcoholic, and, even if you graduate, you won’t get a job anyway. You’ll have to go back for another four years of grad school, if you want to work at someplace other than Taco Bell. (Taco Bell is a topic I’ll circle back to later.)

Also,  if you do so much as walk around campus, with a Clash T-shirt on, some insane person will come up to you ,with a pamphlet, explaining exactly why you are going to hell. (I have a lot of those.)

My response was always, “Wait, are you telling me this ISN’T hell!?”And they claimed that it wasn’t, but trust me, college is basically the same thing as the bad place.

I’ve already written a column in which I’ve compared going to college to playing the video game, Ghosts and Goblins (which isn’t set in hell, but sure feels like hell when you play it, because there are demons in it, and  it’s impossible to beat, and even if you somehow do, you then have to play the whole entire game again, before it FINALLY ends. (Which is the exact same joke I made in that other column, but I think it bears repeating.)

If you can look beyond the sucky parts of college, (Which are pretty much all of the parts) you can find some silver linings.  Like, for example, unlike real hell, college has BEER and TACOS!  There is no fucking way the Devil would allow you to  have those great things if you were being tortured in the pits of hell!

I am well aware there is a ritual called “Taco Tuesdays” in which people regularly eat tacos on Tuesdays, but back when I went to college, there was also a  ritual called “Thirsty  Thursdays,” which was when you go out to the bar on Thursday nights, and, afterward, have the person who seems to be the most sober, drive you to Taco Bell (because it was the only place that was open that late at night.)

So, after being rejected by girls at the bar for an entire night, and being secure in the knowledge that we were failing all our classes, what we would do is drown our sorrows in chalupas, and gorditas, and taco sauce.( But if you use the fire sauce, take warning! College hell will feel even MORE like hell!  Trust me.)

Now, if you lived through the 90’s, you might recall that college is not the only combination of tacos and hell that exists.

For one thing, Taco Bell had an annoying chihuahua for a mascot, and they tortured us with commercials about him, saying “Yo quiero Taco Bell,” until we all bought shirts with him on them, in the hopes that he would just stop saying it. (This was a bad idea. If you like chihuahuas, and tacos, it doesn’t make it OK to wear a stupid shirt with tacos and chihuahuas on it. Trust me, you will regret it. I certainly do.)

To make it worse, they advertised the horrendous 1998 American Godzilla remake, with Mathew Broderick, using the damn chihuahua, so they could give you your Coca-Cola in an enormous cup, with a picture of the foot of the fake Godzilla on it, even though nobody I’ve ever met in my whole entire life has ever liked that movie. (But Taco Bell did have cups of the Michael Keaton Batman, back in ’89, and I will give them props for that movie promotion, becaiuse it was  great, and Michael Keaton went to my college.  He gave a speech at a commencement ceremony there once. (But I’m pretty sure he was drunk, because he just kept rambling on about shoes, for some reason.)

But Taco Bell is not Hellish. I love Taco Bell.

They have tacos, and cinnamon twists. When I was a kid, I used to go there and, for some reason, got a small carton of milk to drink with my tacos. (Which might sound like an odd pairing, but it was good!)

Rocky and Bullwinkle was a cartoon made by Jay Ward Studios, starring a flying squirrel and a very stupid Moose, who accidentally thwarted communists.

It may not sound that funny (although, now that I’m looking at my description of it, it totally does) but the show was great. And they reran it on Nickelodeon and Cartoon Network endlessly. so maybe that was the reason Taco Bell decided to do an ad campaign based on it.

So, Boris and Natasha (Who were the evil communist spies in the show) were trying to make Rocky and Bullwinkle eat burgers instead of tacos.  Now, Moosefans, I don’t claim to be an historian or anything, but I’m pretty sure Karl Marx didn’t have anything in his Communist Manifesto about forcing people (and Moose and squirrels ) to eat burgers instead of Tacos. But in the Taco Bell commercials, that’s what the commies were attempting to do.  They never were able to accomplish this task, because Bullwinkle always ended up accidentally tripping over something, which, somehow, thwarted their evil plans.

I have no idea if this ad campaign was successful or not, but it only lasted for like one year. So, I’m pretty sure it wasn’t.

Maybe, the whole mix of communists, and moose and squirrels, and tacos was not as effective as they assumed it would be.

But the Jack in the Box fast food franchise DID, in fact, have success selling tacos.

Now, full disclosure, Mooseheads. I am not endorsing Jack in the Box, because I’ve never, ever, been to one. (I live in North East Ohio, and we don’t have Jack in the Box here) But, for some reason, I bought a PEZ dispenser of the Jack in the Box mascot, which is, apparently, a snowman with a clown hat on it or something.

After doing so, I watched 40 hours of Jack in the Box commercials on Youtube, and it’s ‘TRUE! Jack in the Box does, in fact, exist, and they do, in fact, have a weird clown-snowman hybrid thing, named Jack Box, as a mascot.  They made precisely 1,000  commercials starring him. (Actually, they are really funny. Look them up on Youtube.) And they sell tacos, which people say are terrible, and composed mostly of grease and, the commercials imply, they are only eaten by stoners, at 3 o’clock in the morning.

Taco Terror was a really mean looking taco, who had a machine gun. (Although, now, that I think of it, a mutant taco, wielding a machine gun, would probably pose less of a threat to you than Taco Bell’s fire sauce.)

A wise man once said, “War is hell.”  Even though college may have been my own personal taco hell, I’m gonna auction off all my Food Fighters, so I can pay for grad school.

Yes, I’m going back to college.

What can I say. I’m a glutton for punishment and tacos.

Now, I shall leave you with a picture of Taco Terror. 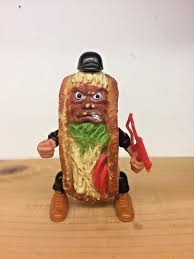