THERE’S A SLIM CHANCE OF SURVIVAL! SO, SNAP INTO A SLIM JIM WHILE YOU STILL CAN!!

OK, COVID has gone too far this time.

It killed the guy who invented Slim Jims.

Now, all of you MooseHeads out there know, the three most important things you buy when you go to the gas station are beer, Sour Patch Kids, and Slim Jims. (Sometimes you also remember to buy gas). Sometimes, Jack Link’s  Beef Jerky, as well, and pork rinds.

No offense to any vegan MooseFriends out there. I don’t hate you, it’s just that I am obscenely fond of meat. I believe God put certain animals on this planet, specifically, to be eaten, which sucks for them, but it’s great for us.

I mean, how can you go through life without eating BACON!?

Meat is also used as a powerup in a lot of video games, like in Castelvania, where you grab the pork chops, which look more like chicken legs or ham than pork chops, but every single person on the internet has talked about that already, so I’m not going to.  (Whoops. I guess I just did)

The point of that is that meat gave Simon Belmont the power to defeat fucking DRACULA! Meat gives us POWER!!!  I mean, animals eat other animals, so why shouldn’t we? Humans ARE, in fact, animals!

And I LOVE animals! I just wrote a sixteen bajillion long word column about my cats. But, guess what! They eat animals! It’s what God intended. And we should honor the noble sacrifice of these creatures by eating them, because they taste good.

This guy was named Alonzo “Lon” T. Adams II” (I’m just as surprised as you are to find out the guy who invented Slim Jims, as we know them, has Roman Numerals after his name).  He died at the ripe old age of 95, and he lived as a hero, a patriot, and a visionary.

He was shot in the fucking HEAD in World War II, during the Battle of the Bulge and yet still soldiered on to perfect the perfect Slim Jim formula!

Slim Jims may seem, to the casual observer, like they are just beef jerky sticks, but those of  us in the know are aware that it’s not just beef. They also have “mechanically separated chicken” in them. I don’t know what the Hell that means, but I’d like to believe it involves chicken corpses being ripped apart by robots.

As many of us old fogeys may recall, back in the 90’s, the wrestler, Macho Man Randy Savage, was the spokes-wrestler for Slim Jims, and the company made hundreds of thousands of commercials with him, saying, “SNAP INTO A SLIM JIM!”

Now, just to be upfront with you Moosekateers, I never have been a wrestling fan, but I like Randy Savage (May he rest in peace). He had a great, gruff sounding voice, and he did voices on cartoon shows, like Space Ghost Coast to Coast and Dexter’s Laboratory, and made commercials promoting mechanically separated chicken/ beef sticks.

They later had another mascot, who was just a dick, who was dressed in a Slim Jim costume, and punched people in the face if they didn’t eat them. That ad campaign was not as sucessful.

But let us not not focus on the negative, my friends. Let us celebrate the great legacy of  Alonzo “Lon” T. Adams II, and “SNAP INTO A SLIM JIM!”   And satisfy our meat tooths. 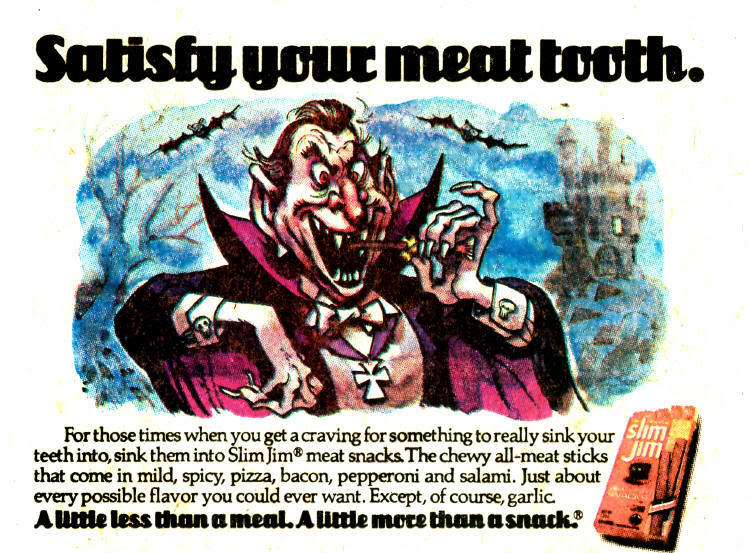