I eat a LOT of candy, my friends. The only thing I eat more than candy is meat. (Although, I think Jack Links Teriyaki Beef Jerky pretty much qualifies as candy) Anyway, I eat it mostly just to keep myself awake  as I power through writing these awesome columns of mine, and drawing my comics. My teeth may have pretty much all rotted out of my head by now, but that’s OK, because people might mistake me for a British person and British people are cool! (I have to practice my accent though.)

I’m trying to cut back on coffee, because my blood pressure has been described by a real ACTUAL doctor as “insane.” I love coffee, but if I keep drinking it, I might have a heart attack and die, and I’m pretty sure “The Best Part of Wakin’ Up” is NOT having a heart attack and dying.

So, candy has been my alternative to caffeine, as of late, and for no particular reason, other than the fact that I feel like it, I’ve decided to list my top seven favorite ones. (Yes, I’m doing a top SEVEN, not a top ten or a top five. Much like the CW, we here at Nick Moose.com dare to defy!)

MARSHMALLOW PEEPS: Marshmallow Peeps are these soft fluffy sugarcoated things shaped like various animals, and snowmen, and pumpkins, and stuff. They have thematic ones for every holiday. I wouldn’t be surprised to find out they had tree-shaped ones for Arbor Day and boxing glove-shaped ones for Boxing Day. (I don’t even know what the fuck Boxing Day is. Does it involve boxing? Or do you put stuff into boxes? Let me know) Or even Bastille Day and I DEFINITELY don’t know what a “Bastille” is!)

Anyway, Marshmallow Peeps are awesome, and they are the second greatest marshmallow thing after the Stay Puft Marshmallow Man. Don’t attempt to eat him, though, because he will step on a church and try to kill you. (Just kidding. I know that was actually Gozer.)

AIRHEADS XTREMES: Airheads Xtremes look like bacon , if bacon was rainbow-colored. It’s like fruit bacon, coated in thousands of pounds of sugar. What else do I even need to say? Go buy some now!

SOUR PUNCH STRAWS: Sour Punch Straws are also coated with a metric ton of sugar, but they are shaped like straws, and you can actually drink BEER through them!! Which sounds awesome in theory, but in practice, the end of the straw that was dipped in the beer becomes soggy and inedible. So, you really only end up eating half of the straw. That half is still really good, though!

GUMMY WORMS: Gummy worms. Who doesn’t know about Gummy Worms?  They are way better than Gummy Bears. (Unless you count those Amazin’ Fruit Gummy Bears from the 90’s that burst juice into your mouth when you ate therm. Those were the best thing ever.) There should be a war between the Gummies, Worms vs. Bears. See, you might think a bear would be able to defeat a worm, but Gummy Bears are smaller and the Worms could strangle them. I’m gonna pitch “Gummy Wars” to a movie studio. Why not? They make movies about fucking emojis.

NERDS (More specifically, Nerd Ropes.) The movie, Willy Wonka and the Chocolate Factory is actually pretty horrific. It’s mostly just about spoiled kids getting horribly mutilated for their sins. Which should come as no surprise, since it was based on a book by Roald Dahl, who wrote many traumatizing children’s books, and that episode of Alfred Hitchcock Presents, where the woman clubs her husband over the head with a leg of lamb and then serves the lamb to the police when they are investigating. (I’m surprised he didn’t turn that into a children’s book) But they made a candy company called Wonka, based on the movie and the book, and that company makes Nerds, which are like these little goblin creatures that are sweet and crunchy and love it when you eat them! And Nerd ropes consist of a whole bunch of Nerds stuck to a big sticky thing that tastes really good.

PEZ: I own over 500 PEZ dispensers, but even I have to admit, PEZ candy kinda tastes like chalk. I don’t care, though, because PEZ dispensers are awesome, and let you eat chalk-tasting candy out of the necks of some of your favorite pop culture icons. I’m not gonna go on too much about PEZ, because, I guarantee you, I will end up writing five hundred columns devoted specifically to them.

HONORABLE MENTION GOES TO RING POPS:  I plan on proposing to my girlfriend with one, because I can’t afford a real ring. 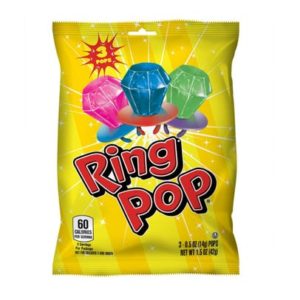