Hey there, Moosekateers. I know all 15 of you who read my column know my usual policy is to never talk about politics. Usually, I just talk about stuff like girls, PEZ Dispensers, ancient cartoons, and animals with stupid names (Like the Hoary Marmot, even though I don’t even know what one of those looks like. But it’s called a Hoary Marmot, so, I love it anyway.)

But now we just got our first Jamaican, female Vice President, and I’m so fucking giddy with excitement, I could pee!

I’m easily the whitest person you will ever meet. I might as well be translucent. But I LOVE Jamaican music and females. So, Kamala Harris was the one I was gonna vote for. I like Joe, but I’d rather she be the one who was President. And I’d like to think she likes Ska, and possibly even Ska Punk.

For the grotesquely uniformed, Ska is a type of music that originated in Jamaica. It’s similar to Reggae, but when you listen to Reggae you smoke weed, and mellow out, like Bob Marley. When you listen to Ska, you drink a near lethal amount of beer and dance your ass off.

The dance you do is called skanking. Now, that might sound perverted, but it’s not. What you do is get super drunk and flail your arms back and forth and kick your legs up and down like you are having an epileptic seizure. It’s the perfect type of dancing for people who have no fucking clue how to actually dance (Like yours truly). I wanna Skank with Kamala at a Ska show.

But that was the Ska from my era. The fist wave of Ska was purely Jamaican music back in the 60’s. The second wave, in the 70’s, was a mixture of Ska and punk, initiated by bands like The Clash and The Specials, in the U.K.

But, there was like 15 minutes in 1997 when Ska Punk was the most popular music in America. Then everyone either decided they hated it or forgot it existed. (The same thing happened with the Swing music revival. Do you remember the Cherry Poppin Daddies? No. You don’t.)

Anyway, Ska Punk was my favorite type of music. I even owned albums by insanely obscure Ska bands like The Voodoo Glow Skulls, the Mad Caddies, and Mustard Plug. Even the band members of those bands probably don’t remember they were ever in a band.

But in honor of my beloved Kamala, and her Jamaican heritage, I’m gonna list my top five favorite Ska bands from the the third wave  of Ska, and why I like them.  (Even though the third wave 90’s bands were  almost always just a bunch of white guys, and sometimes girls, who drank a lot and owned horns.)

And no, I will not be listing No Doubt or the Mighty Mighty Bosstones. I loved those bands, and have seen them live, but I have a friend who teaches Rock n’ Roll and she says those are the only Ska bands she talks about because the Bosstones were in Clueless and Gwen Stefani from No Doubt is now on some damn singing show or something. So, I’ll switch it up a little and talk about other bands.

GOLDFINGER: Goldfinger had a ton of great songs, and one of those songs, Superman , was even featured on an episode of Dawson’s Creek, one of my favorite shows from back in the 90’s! They talked about masturbation on the first episode of that show! Goldfinger is a Ska Punk band, named after a great James Bond movie. They eventually became vegans and would show horrific videos of animals being killed just to convince people not to eat meat in a back room behind the concert.  I am not a fan of being a vegan my friends. (I’m a Meagan. I only eat meat.) But they were still a good band.

THE AQUABATS: This band is well known now because of that Yo Gabba Gabba show on Nickelodeon. But, once upon a time, they were just a bunch of weird Mormon guys who squeezed into skintight superhero suits, and played Ska music. (Fun fact: Travis Barker from Blink 182 was once their drummer.)

THE HIPPOS: The Hippos were like Weezer, if Weezer were a Ska band. In the great words of Stan Lee, “‘Nuff said.”

LESS THAN JAKE: I have seen Less Than Jake roughly five million times, even when I wasn’t actively trying to see them. Like, I would go to Warped Tour, and they would be there every time. They are one of my favorite bands. Here’s a fun anecdote: The band got their name because, when they used to practice, the lead singer’s family’s dog  hated the noise, and his parents would tell them to stop playing.  The dog’s name was Jake. So, they were “Less Than Jake.” Also, they had an album named PEZ Core, and I love PEZ

REEL BIG FISH: Reel Big Fish is the greatest band EVER. Even though it’s really just one guy, Arron Barrett, with an ever-changing lineup of backup band members, every lineup has been awesome. They are funny, they say the word “fuck” all the time, and have, at least, a dozen songs about beer. They have an ironic juxtaposition between their angry lyrics and happy music. Their album, “Life Sucks Let’s Dance,” might as well be the soundtrack to the COVID apocalypse. 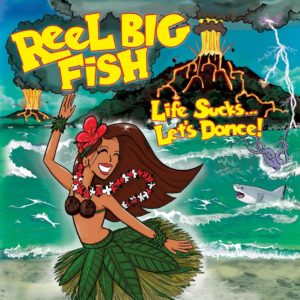