Nick Moose’s View, Where Are You?

So, I know all you maniacal Moosekateers have been missing me ever since you gazed your googly eyes upon the last column I composed.

I have no doubt all 16 of you ferocious followers of mine have been searching for me with a fervor that rivals most folks quests to find Carmen Sandiego or Waldo, or that Sinbad Genie movie. Unlike those other enigmas though, all new Nick Moose’s Views CAN, in fact, be found! You’re even reading one RIGHT NOW!!

That’s right, this very website NICKMOOSE.COM is the new place in cyberspace for this award winning column! (I’ve been writing this column off and on for roughly 100 years, so my memory may not be what it used to be but I swear at one point it won some kind of an award!  It was probably 65 years ago but I’d only had like 65 drinks that night, which means that I’m at least 65% certain that it actually happened!)

Now, I’m sure due to the prolonged absence of Nick Moose’s View, some of the trashier tabloid websites have been inaccurately reporting that I’ve met some untimely demise, well I’ve got news for you guys, I didn’t die and I wasn’t replaced by a clone who refused to write my column!! You’re thinking of Avril Lavigne with that whole death/clone thing. To be fair though, Avril Lavigne’s clone DID refuse to write my column for me but we’ll save that sordid story for another day.

Point being, don’t buy into the gossip! As some other guy once said, “The reports of my death have been greatly exaggerated.” ( Who was it who said that again? Jim Varney?) I wasn’t sprung from this mortal coil, oh no, I was just busy creating my own website to showcase all of my wacky works, one of which is this cockamamie column!

And because I’ll be my own editor now, God knows WHAT I’ll leave in! You should probably preemptively start writing me complaint emails! And don’t be shy on the insults! I’m used to it! I’ve already gotten every complaint from “Dear Mr. Reindeer, or whatever your name is, where the Hell do you get off…”  to “Nicholas, This is your seventh grade English teacher, you should really not make your entire column be one long run on sentence….”

These complaints are duly noted and filed away in my memory bank, right next to other important stuff, like all of the names of all of the Snorks.(Can you even name THREE Snorks!? I thought not!! So, don’t judge me!!)

How voluminous my column may become may also be affected by me being my own editor. Sometimes the columns will be nine gazillion words long. Conversely, they could be a mere 50 words long!   (OK, I’ll admit, I’m just kidding on the fifty words long thing. I mean, I can’t  greet the Domino’s guy with less than 500 words, and I always waste 12 of those words on saying “ WHY THE FUCK DON’T YOU GUYS JUST BRING BACK THE NOID ALREADY!?”)

NickMoose.com will also be the brand spankin’ new home of the Moose Comics Universe! But that is a story for another post!!

Also , I promise, this site will eventually include other funtastic features like “The Moose Merch Mall” which is a total rip off of Kool-Aid Man’s “Wacky Warehouse Mall” where you may be able to buy some useless Nick Moose-related shit ( Someday, in the future, after I’ve actually produced some purchasable Nick Moose shit.)  and “Moose-Tube,” which will have videos made by me and may feature something like a Vlog for yours truly which, I SWEAR will not consist exclusively of me dancing  around in my Underoos while clutching my Grubby from Teddy Ruxpin, and singing Billy Joel Songs!

Although, me dancing around in the NUDE, while singing Billy Joel songs, and clutching my Grubby from Teddy Ruxpin, may not be entirely out of the question. So, just please, proceed with caution, if you plan on clicking on that particular section! (Also, is “clutching my Grubby” a euphemism? If it wasn’t before, it is now!)

And there will also be some Mooselaneous (see what I did there!?) fun stuff for you to discover on here too!

The point being, I think, that me having my own personal website that encompasses all of my insanity is going to be good for me! And I’m hoping that maybe, just maybe, in some miniscule way, if you look back at it from whatever asylum you’re in someday, all of you members of the Moose Troop will say it was good for you too!!

So, welcome, one and all, to the WAY OUT WORLD OF NICK MOOSE!!

Now, if you’ll excuse me, I’ve gotta go back to clutching my Grubby. 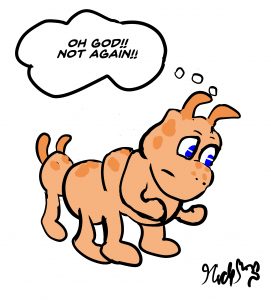