Dustin Diamond just died the other day and I’m feeling emotions about this.

The lead singer of  GWAR once said, “The 70’s had a lot of bands who named themselves after geographical locations ( like Boston, America and Kansas) and he said that they all sucked.

(I disagree with that, but I do prefer the 70’s bands which had “The” in their name, like The Ramones, The Sex Pistols, The Damned, The Dead Boys, The Clash, etc.)

Now, I’m starting out this column, which is about a 90’s TV sitcom, by writing about 70’s music, but this is not just  another example of me getting way off topic like I always do.

Allow me to elucidate.

I only started watching it when it went into syndication and  was aired every single afternoon on TBS, because Ted Turner got the rights to it, just like he did with everything else that existed.

Which reminds me, that recently it was Groundhog Day and, similar to the movie, wherein Phil Connors had to live the same day over and over again, back in the 90’s (Remember to play the Nick Moose drinking game where you read all my columns, and every time I say “Back in the 90’s,” you take a drink.  You will get wasted. I promise. )  we kids had to watch Saved By the Bell over and over again, because it was the only thing on right when we were, literally, “saved by the the bell” and finally got to go home from the hell that was school.

It was on TBS, back to back with reruns of Family Matters, and both shows prominently featured iconic geeks. Family Matters had Steve Urkel, and Saved By the Bell had Screech, who was portrayed by Dustin Diamond.

For you mini Moosekateers who have never watched it, and only know of it because Jimmy Fallon had a reunion of the cast on his show (which Dustin Diamond did not attend), I shall explain the premise.

It’s pretty much like a live action Archie comic book, with a bunch of teenage kids who date each other, and play in a band. It’s actually a far more accurate version of an Archie comic than Riverdale is, because it’s fun, people don’t get serial killed in every episode, and it doesn’t have plotlines based on incest.  Riverdale is way more like Twin Peaks than Archie comics. Twin Peaks was very popular back in the 90’s. (Take a drink.)

It originally started out as a show called Good Morning, Miss Bliss on the Disney Channel, but the cast was slightly different, and featured Haley Mills, the star of the original The Parent Trap, as Miss Bliss, the teacher.  As we all know, there was a remake of The Parent Trap, starring Lindsay Lohan, and, as you old school Moosekateers may recall,  I used to date Lindsay Lohan before she went insane. (Good times.)

When they sold the show to NBC they retooled it a bit. It was more like Goodbye, Miss Bliss, because Haley Mills was gone.

But they did keep a few characters and actors from the original version.

They kept the main character, Zack Morris (portrayed by Mark Paul Gosselaar), who was the good-looking guy who could stop time, and break the fourth wall, to talk to the audience, like Deadpool, and owned a cell phone that was roughly the size of Texas.

Now that I think of it, though, back in the 90’s, (drink ) the five people in existence who actually owned a cell phone had one that was roughly the size of Texas. Everyone else just had pagers. (You will probably have to Google what a Pager is, if you’re under the age of 35)  They also kept the principal character, Mr. Belding, played by Dennis Haskins.

They changed the setting of the show, from Indianapolis to California.  California was considered super rad to the max back in the 90’s (drink) because it was not constantly on fire like it is now. And, in fact, the Max was the name of the restaurant the kids all hung out at on the show.

One of the characters who carried over to the new version was Samuel “Screech” Powers, the geeky guy who wore Hawaiian shirts and, inexplicably, hung out with the popular kids, who, for some reason, tolerated him, even though he was insanely annoying.

Full disclosure, I wore Hawaiian shirts back in the 90’s (drink) mainly because the singer of Reel Big Fish did. Let me tell you, that does not get popular kids to like you, in real life. Not even back in the 90’s. (drink)

Also, Lisa Turtle, played by Lark Voorhies, carried over to the NBC version, and, I’m pretty sure, she was the only Black person ever to appear on the show. Lisa Turtle may have seemed like a weird name choice but, hey, my name is Nick Moose. So, no judgment here!

They added characters like A.C Slater, who was the jock of the group, played by Mario Lopez, and Kelly Kapowski, played by Tiffani-Amber Thiessen, who was the cute girl everyone wanted to have sex with.  (Not just the characters on the show, but everyone who watched it.)

They also added Jessie Spano, played by Elizabeth Berkley, who was the studious girl who starred in the most infamous episode of the show, wherein she overdoses on caffeine pills, and sings “I’m so Excited,” which was intended to be serious, but ended being unintentionally hilarious.

They had a bunch of different iterations of Saved by By the Bell, and Screech and Mr. Belding were in most of them.

It must have been tough for Dustin Diamond to be known only as geeky Screech, for his entire life, and then die of cancer.

My uncle was recently diagnosed with cancer, and I donated to Breast Friends, which is an awesome charity organization that helps out folks who don’t only just have breast cancer, but any kind of cancer. And, when you do so, you can get the name of whoever you are donating it for emblazoned on a beer can.

I love breasts, and I love beer, so, of course, I donated, and I hope some people donated for Dustin.

I know you might not have had a wonderful life, Dustin, but you entertained a lot of people. And, so, your life was not wasted. You are not “Dust in the Wind, ” you are a legend.

And, as Clarence said, in It’s a Wonderful Life, “Every time a bell rings, an angel get’s his wings,” so, you must have given out a lot of wings over the years. 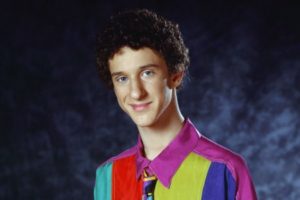